A recruit a day keeps the doctor away…

I am a marine biologist with a specific interest in understa...

As I write this blog, the mobile phones are flying away and I have to stop my laptop not to fall down from the table. We spent the night in the lee of the island of Saba and are now on our way to the first dive spot of today at the Saba Bank. I am one of the few lucky ones who did not become seasick yesterday. Fingers crossed for today! 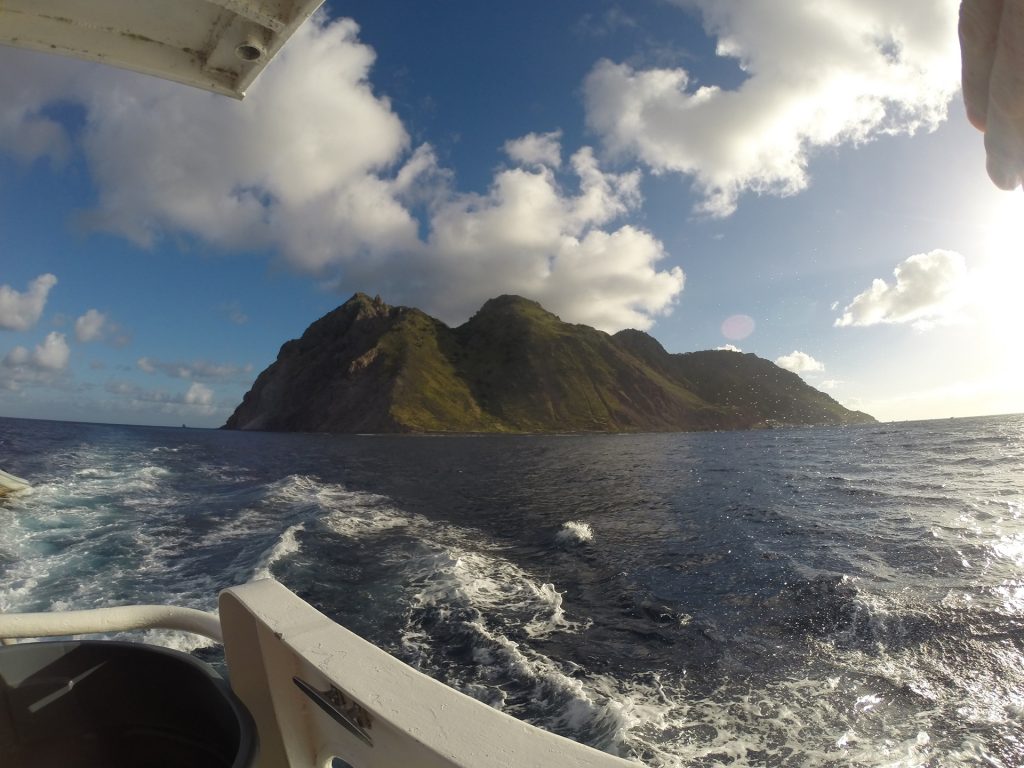 Impression of the working conditions with the island of Saba in the background (Photo: Oscar Bos)

So far we have mainly found recruits of brooding coral species, such as the mustard hill coral Porites astreoides. Larvae of this type of corals develop after fertilization inside the coral polyps of the mother colony, instead of free-living in the water column. These larvae will often settle near the mother reef. This contrasts with “broadcast spawning” coral species where the fertilization and development of the larvae takes place in the water column. Such larvae will more likely settle far away from the mother reef if they survive this phase. 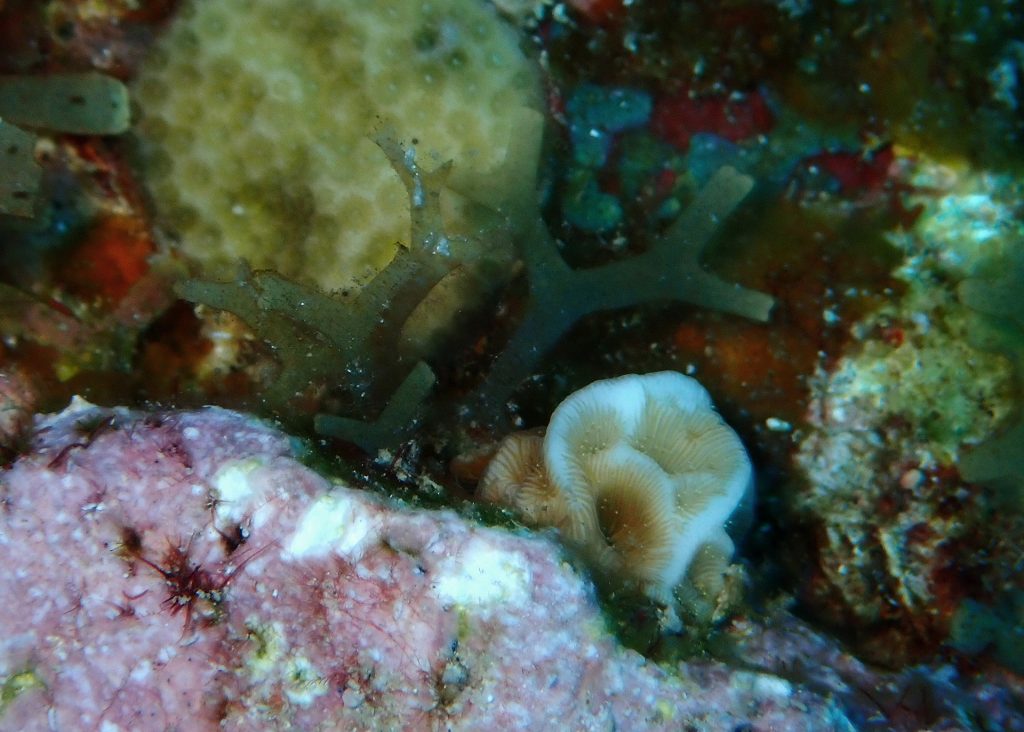 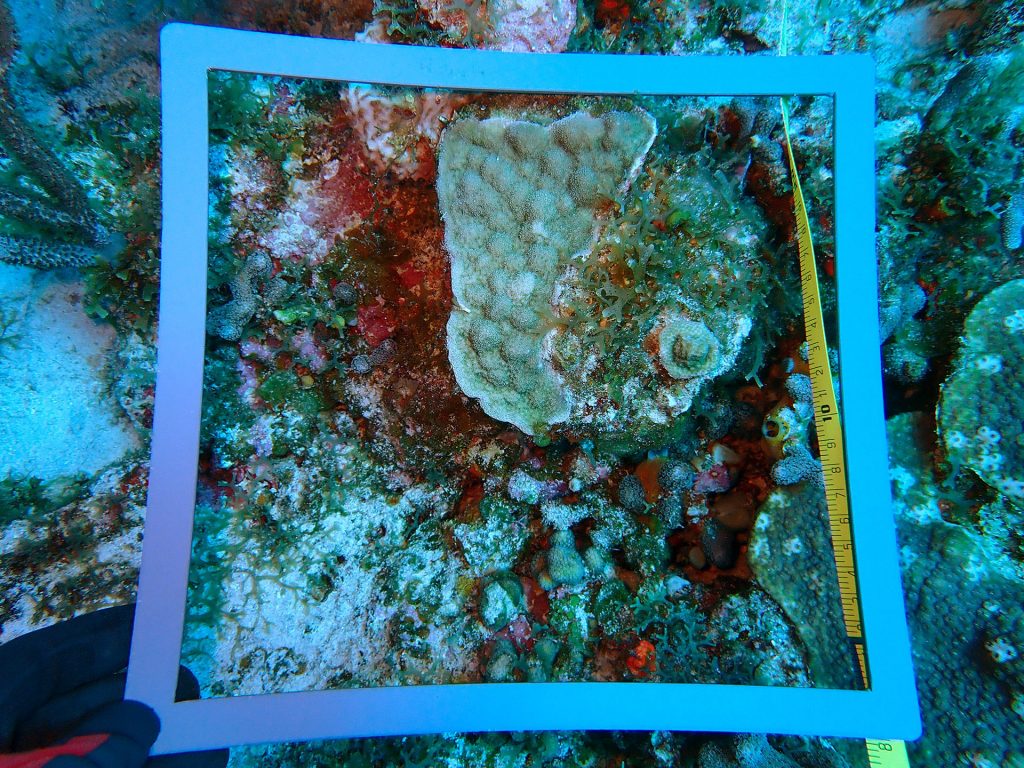 Quadrant within which recruiters are counted (photo: Miriam Schutter)

We hope to find also more young corals of the latter species in the coming days, because that means there is an exchange between the Saba Bank and other reefs.

The monitoring of coral recruits is an intensive job. We carefully inspect every plot of 25×25 cm2 for corals, inside every crevice and underneath all swaying algae. As there is no red light at a depth of 20-30 m (everything looks blue), it helps to search the substrate using a small torch. Due to our intensive research we unfortunately do not always see what is happening around us, such as various visits of sharks, rays and turtles. Nevertheless, during the joint ascent to the water surface I saw a big nurse shark, which was taking a nap nearby our transects! 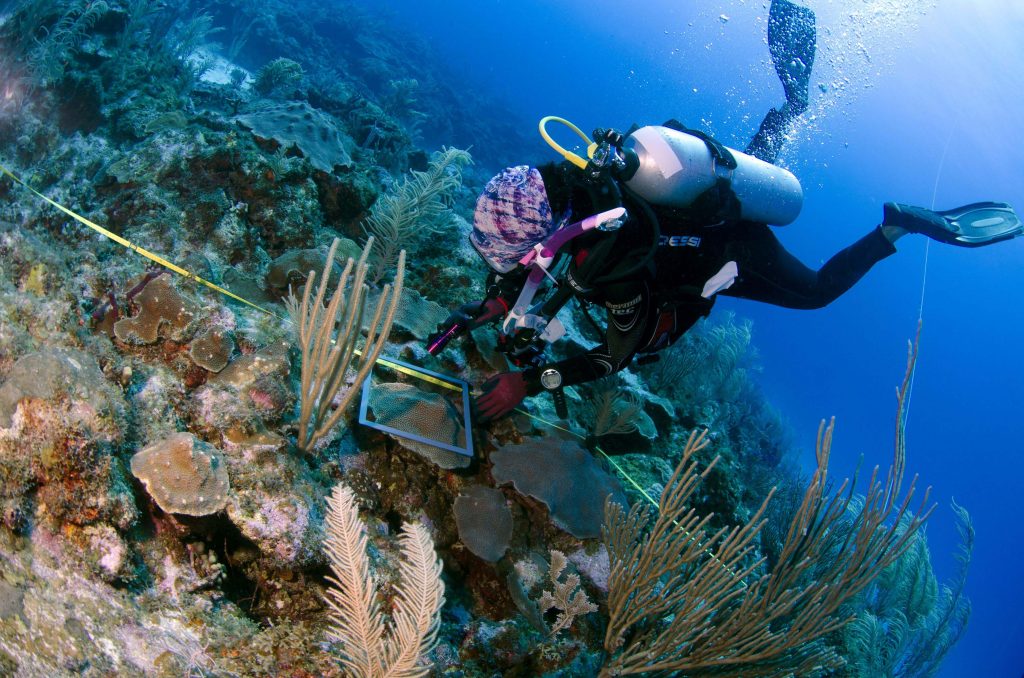 I’m going to get ready for the third dive today, on the edge of the Saba Bank: Erik’s point. Hopefully the high waves will calm down a little bit so that we can “easily” get in and out of the water. Because it can get rough and spooky on the Saba Bank!

And rough it gets indeed! The third dive turned out to be more difficult than expected … there was a lot of current and high waves: for a number of divers of the second team who were dropped in the water last it was not possible anymore to get to the anchor buoy. I have also kicked my legs in vain to never reach the buoy. We have been taken back on board without doing our dive. Eventually the other divers were taken off the water with a boat at the end of their dive! It was quite an effort! Everyone is dead tired now … and for tomorrow we have to come up with a better plan with the crew of the ship to avoid this kind of ‘rescue missions’!

I am a marine biologist with a specific interest in understanding the resilience and adaptive capabilities of coral reefs, especially in relation to human pressure and environmental change. I received my PhD from Wageningen University in 2010, studying the ecophysiology and aquaculture of stony corals. During my postdoctoral research in Taiwan, Japan and Mexico, I further specialized in coral reef ecology, coral reproduction, reef restoration and climate change studies. For me, it is important to keep looking for ways to protect these precious ecosystems for future generations.

Since joining Bureau Waardenburg in 2017, I have been applying my professional experience to a diversity of applied topics in the field of tropical marine ecology: my projects have brought me back to the Caribbean several times (Curacao, Bahamas, Colombia and Saint Lucia). Besides coral reef biodiversity research and developing techniques for monitoring and restoration of coral reefs, I also contribute to the reduction of impacts on coral reefs from development projects (e.g. ecological monitoring, environmental management plans, environmental impact assessments) while working with universities, governments and the private sector.

Joining the research expedition to the Saba Bank fits in my mission to join the Dutch coral reef experts to increase scientific understanding of a variety of reef ecosystems and to provide a future for coral reefs!