Today everybody is arriving in Sint Maarten. Excitement is building up. For half of the 17 researchers this is not the first time on the Caribbean Explorer II, which is good for me, they’ll know the drill. The airport in Sint Maarten is still not fully rebuilt since it was heavily damaged by hurricane Irma last year September. Tomorrow we will embark and leave from Sint Maarten to Saba, a crossing of probably some 4 hours after which we will spend the night on the leeside of Saba. Early morning we go over to the bank. The weather last week has been very windy with big waves on the Saba Bank, but the coming week the forecast looks promising with decreasing winds as of Sunday.

Benthos is another name for the living organisms that cover the bottom. In the case of the Saba Bank the benthos community consists mostly of corals, algae, and sponges. The Saba Bank is an enormous sea mountain of approximately 60 by 40 km. It rises up from approximately 1000 meters depth to just below the surface of the Caribbean Sea. The shallowest areas are around 12m and pose a risk for ships, that actually are not allowed anymore to anchor on or cross the Saba Bank since it became protected (Particularly Sensitive Sea Area under the International Maritime Organization). In the nineties it became clear the anchoring tankers were causing much damage to the benthic communities of the bank. It led to concerns and more research which eventually meant the bank became a protected area. Today it’s the largest protected area, national park, within the Kingdom of the Netherlands. 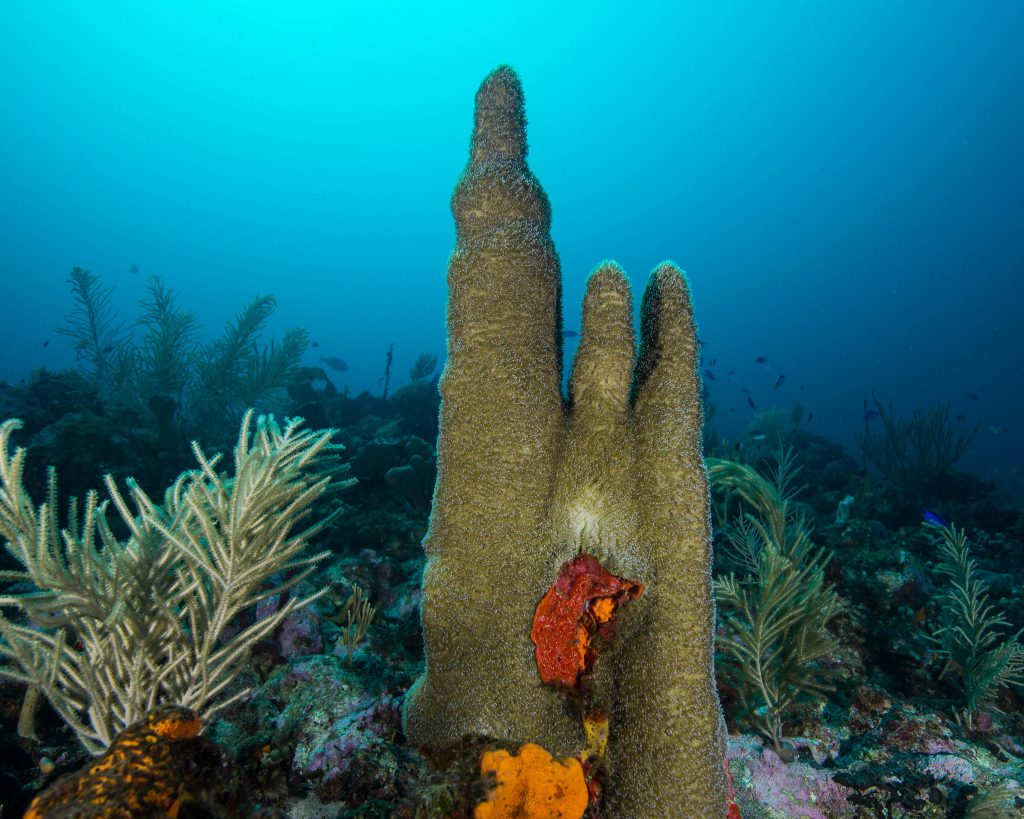 The Saba Bank has been an important area for fishermen from Saba and St. Eustatius since a very long time. I’m not a historian, but already in 1907 a Dutch biologist called Boeke described the importance of the Saba Bank to the fishermen from both islands. It wasn’t till 90 years later that I was to set foot (if you can call it that when you’re diving) on the Saba Bank.

The first expedition was in 1972 and the following years it was visited several times by the hydrographic vessel H.NL.M.S. LUYMES, primarily to carry out bathymetric surveys. Jakob van der Land was a biologist from Naturalis, the Netherlands Biodiversity Center, who was the first to describe the amazing coral reefs of the bank. This is his abstract:

‘The Saba Bank is a rather large submerged island in the northeastern Caribbean. Its top is remarkably flat, the water depth being about 20 to 40 m over most of its surface. There are several peripheral reefs around the whole bank and because of this it may be called an atoll, even though on some of these reefs there is probably no modern coral growth. The presence and distribution of shallow water stony corals in the area is discussed in some detail. As an atoll the Saba Bank is remarkable for its very large surface area, the great height of most of its Holocene reefs and the exceptional width of its windward reef flats.’

We think now that the Saba Bank is not really an atoll in the sense that Darwin described them. The reefs along the edges of the bank have developed during ice ages when the sea level was lower and since the last ice age they kept pace with the rising sea. However, if you would consider the bank an atoll in a broader sense, a ring-like structure of reefs, then it would easily qualify as one of the biggest atolls in the world.

I’m a coral reef biologist and in 1996 I was one of the first to actually dive on the Saba Bank. With a fisherman from Saba I left early morning from Saba and we crossed the narrow 300m deep channel between the tiny island and the bank and alone I dived down to its amazing depths. I was greeted by a spectacular reef scene. Corals were the main constituents of the bottom covering up to 90 percent of the space and in all of the 7 sites that I visited coral cover was more than 60%. Coral colonies were enormous and fish, larger than I’d ever seen, swam above and between them.

Since then much has changed. Pollution, diseases, introduced species, and climate change have drastically reduced coral cover all over the world. The fish have moved away as their homes became less and less attractive. Today, coral cover in the Caribbean, including most of the Saba Bank, is on average not more than 10-12 percent (We describe the long-term (40 years) development of the coral reefs of the Dutch Caribbean in a recent paper which you can read blue homework folder). This is a worry since many islands depend heavily on the surrounding reefs. 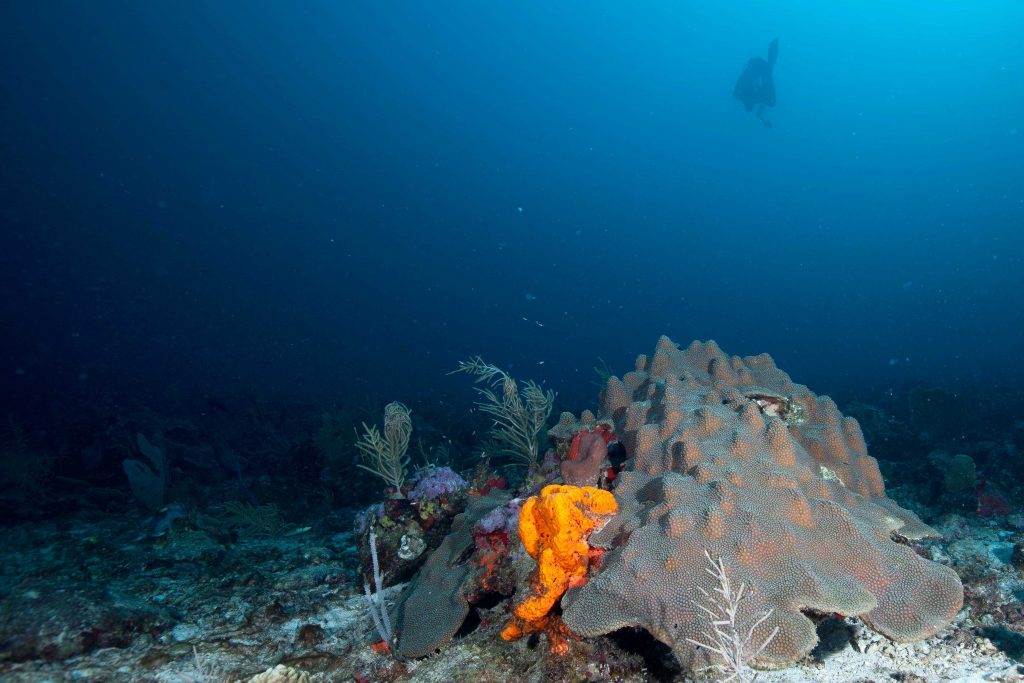 Since 2010 we closely follow the reefs of the Saba Bank and keep a finger on its weakening pulse. There is still hope for this area since it is far away from densely populated islands and pollution, and it is heavily protected; protection that is implemented by the Saba Bank Management Unit on Saba and the Dutch coastguard. During the film studies essay help earlier this year we discovered an area on the bank that still has very high coral cover (more here).

What will we do during the expedition?

During our 1 week expedition we will visit 10 to 12 sites along the eastern and southern edges and assess the cover of corals, algae, sponges and other organisms. The researchers swim down and lay out 3 transect lines of 50m each.

We go down in two teams. The first team of 8 people consists of scientists that will assess the fish. They need to be the first group because fish will swim away from you. On each transect line one person counts all the fish down to species level and estimates the size of each fish. The line is actually not yet in place, but is rolled out behind the researcher by his buddy who is directly behind him and signals the end of the 50m transect. I’m getting too much carried away here and should leave some space for my colleagues to write about their research. 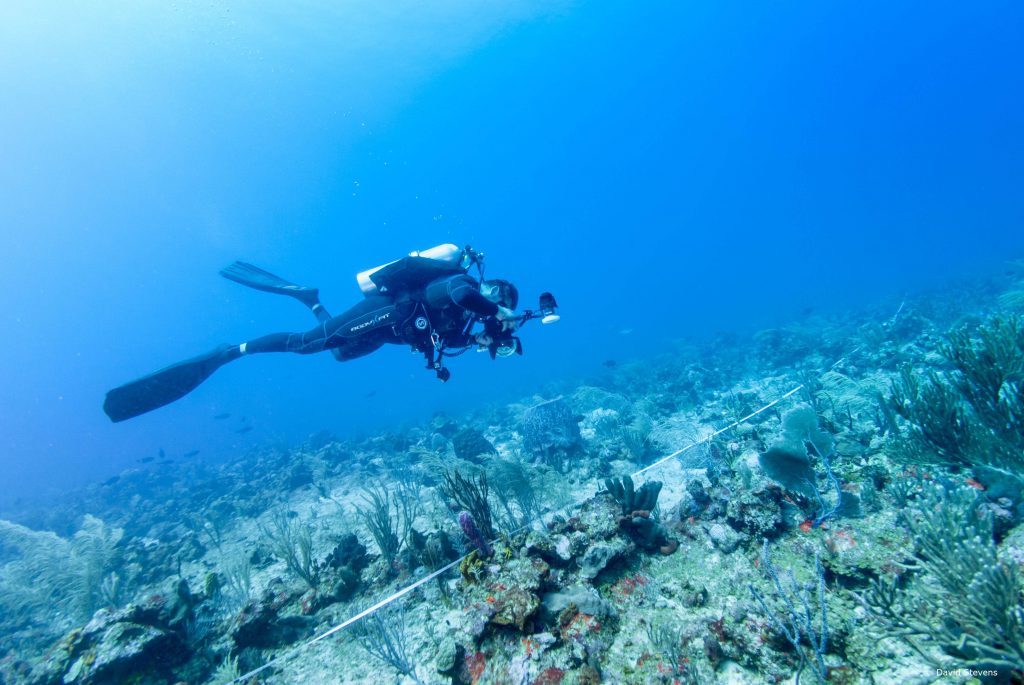 The benthos scientists, including me, Jean-Philippe and Franck, are in the second group. The transect lines are left in place by the first group and on each line a scientists takes 50 high resolution photos each covering approximately 1 square meter. Later these will be studied and analysed to give estimates of cover of all the benthic groups. Because of depth we need to work quickly and after 40 minutes it’s time to go up and climb on board of the Caribbean Explorer II where we will sit and wonder about this amazing place.

More from my colleagues. I hope you will enjoy their tales.