An oasis of civility

Our luck improved since our first sampling attempt on Edgeøya, and finally we were beginning to fill our sample bottle storage box. As our boat made its way through glassy waters surrounded by steep, scoured cliffs where landslides had exposed the permafrost in some areas, we approached the glacier of Hamberg Bukta. The ice lay between the mountains like a sleeping giant, while the crystal clear waters looked so inviting, we were almost tempted to go for a dip, had hypothermia not been a likely consequence. Over the past decades the glacier has retreated significantly, and is expected to continue to retreat, potentially opening up a new shipping route. Our captain told us the new short cut was eagerly anticipated by many sailors. 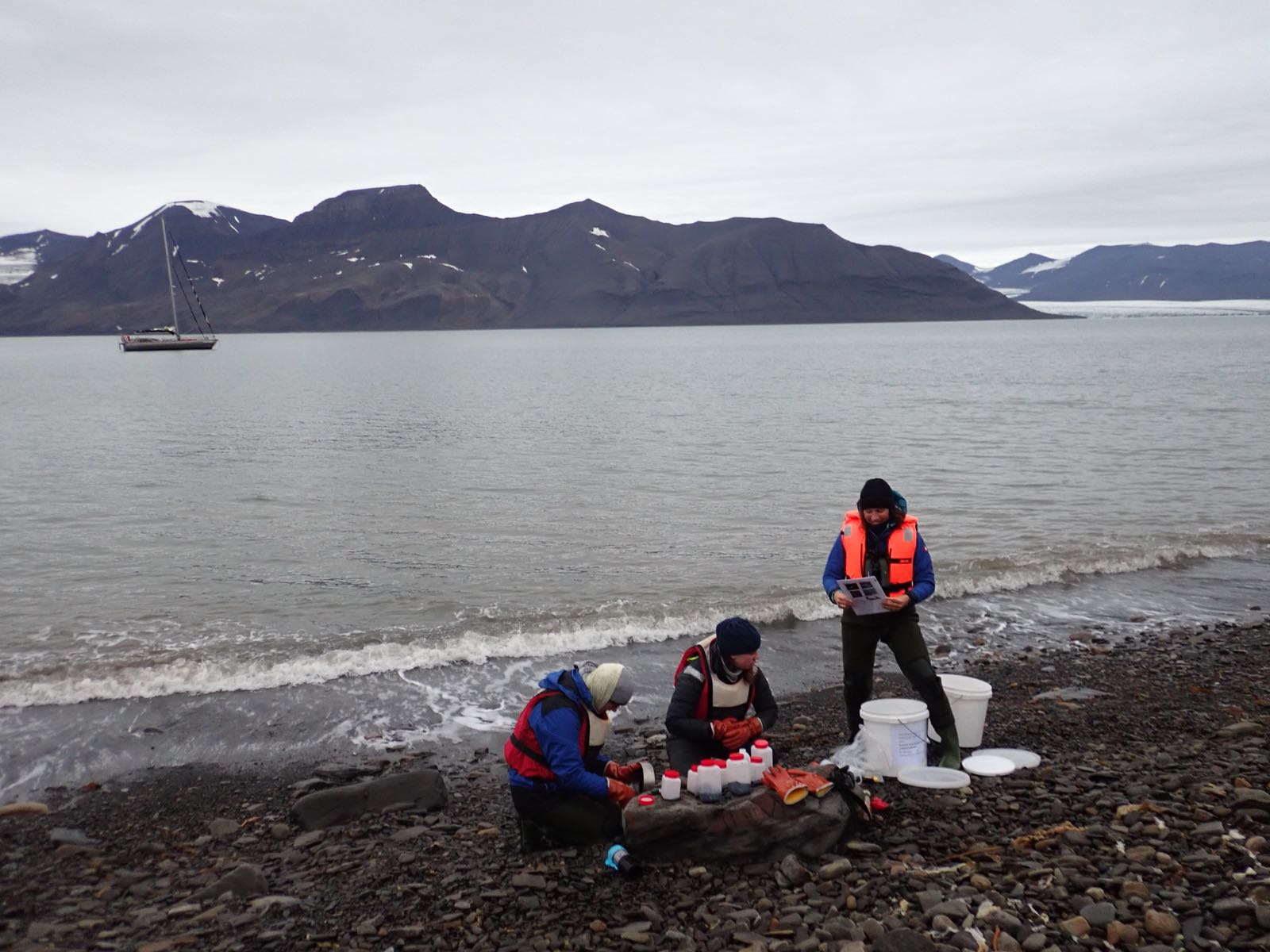 The beaches in this area are very narrow, so although transects were not possible, we did collect some good sediment samples along the water’s edge. There didn’t appear to be much life in the sediment, but there were certainly traces of life on land, as Hans pointed out when he showed us footprints in the tundra of a mother polar bear who had passed by with her cub as some point. This find really brought home the idea that we are sampling in an exposed area with nothing to stop a large wild predator from wandering into our vicinity. Had a polar bear arrived, we would have evacuated ASAP! 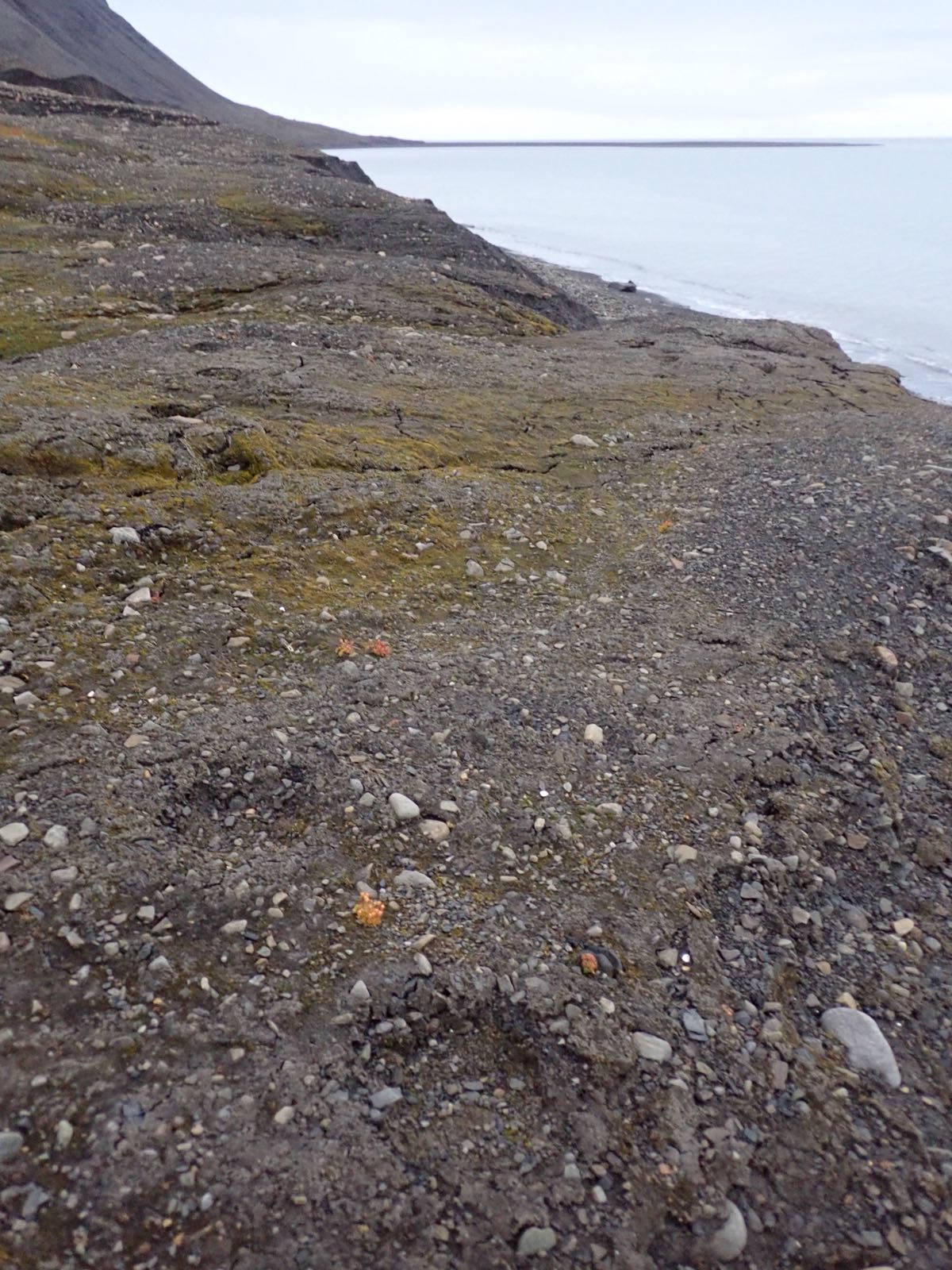 With our sampling done we sailed on to our next location: Hornsund. Our Polish captain was quite eager to visit the Polish research station located in this fjord. It took another overnight trip to get there, but we made it and were greeted with another glacier, this one more active than the last, a snoring sleeping giant, with sporadic thunderous crashes that reminded us how small and vulnerable we are in this rugged landscape. As we sailed into the bay, the small icebergs floating around us made distinctive popping sounds, like when an ice cube is dropped into a glass of water, only amplified and in surround sound. This doesn’t happen with sea ice, so these icebergs had definitely originated from the glacier. 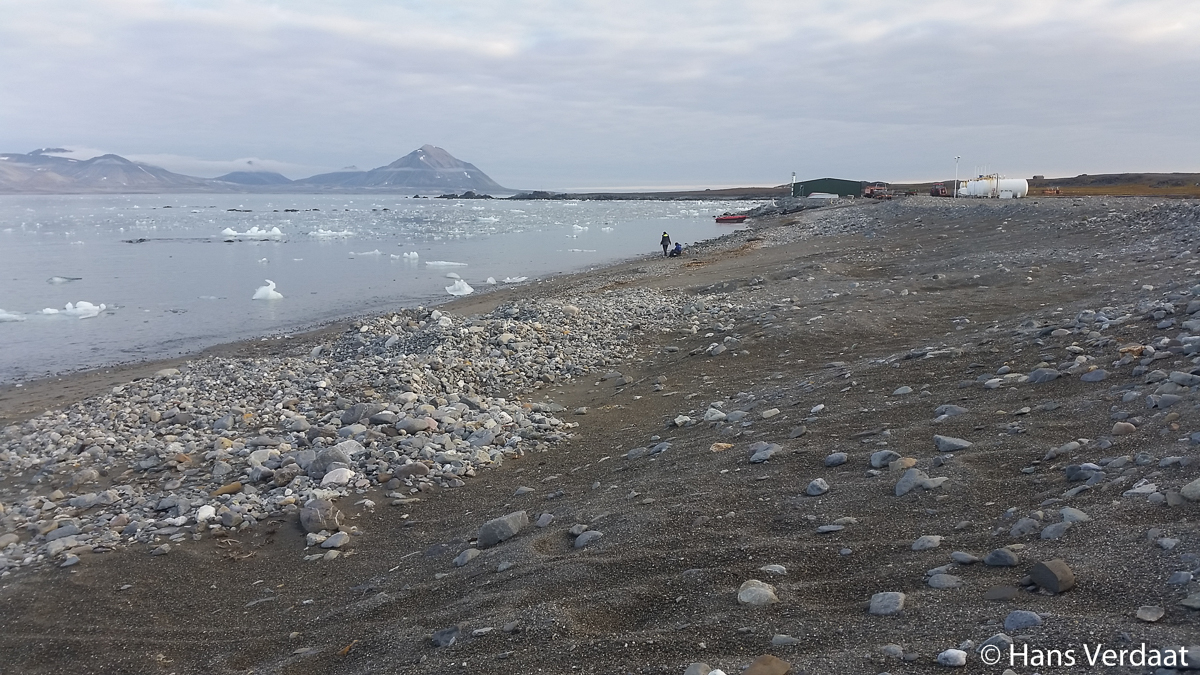 Sampling near the Polish research station (photo by Hans Verdaat)

The beaches in Hornsund were perfect for our sampling; varied substrates, orientations, exposures, and intensities of human activity. So we got straight to work. The thing with sampling in the Arctic in 24 hour sunlight is that it really doesn’t matter what time it is. We arrived in the bay at about 17:30pm to begin our day of sampling. We continued working until dinner time at 02:30am before going to bed. I have a feeling we will be somewhat challenged to return to a normal schedule. 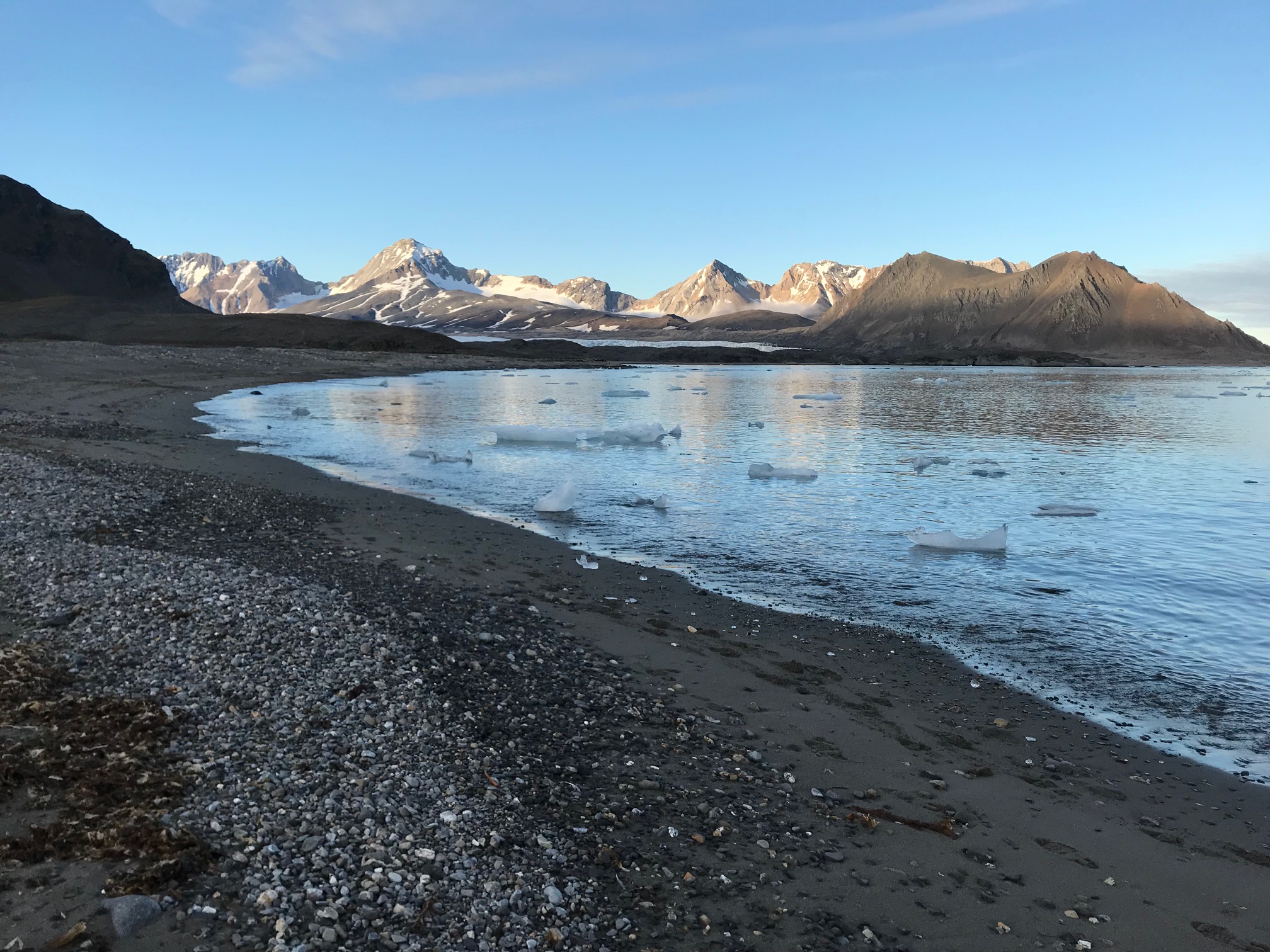 Our sampling raised some interest from the locals. At one point a particularly playful Arctic fox, in its dark brown summer coat, trotted right past us looking for snacks on the beach. While sampling the low tide, we were so engrossed in the sediment that we failed to notice three different foxes coming to investigate us from as close as 2m away! But our favourite sighting was when a young fox bounded up to a young reindeer, the two of them touched noses in mutual interest before playing some type of chasing game. 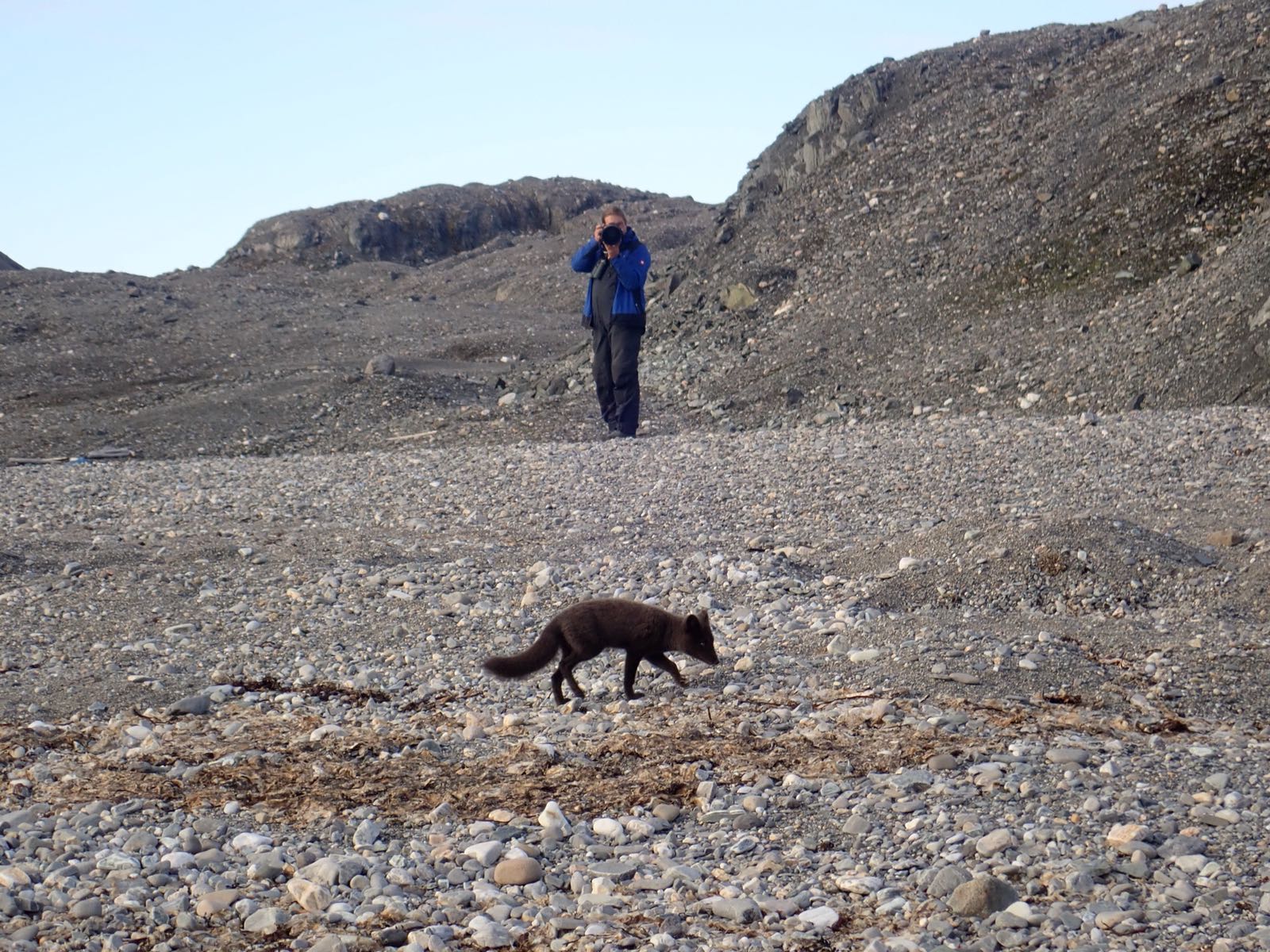 After the first two of the three beaches we sampled that night we went to visit the Polish station and were greeted with overwhelming hospitality, a cup of tea, an actual couch to sit on and even a little Wi-Fi to make some contact with the outside world. We were also offered a shower in the morning. I’m not sure whether that was a general show of hospitality, or a polite recommendation, but either way the offer was enticing! Unfortunately, after waking up on the boat at 10:30 the next morning, there was no time to take them up on the offer so we must continue unbathed. 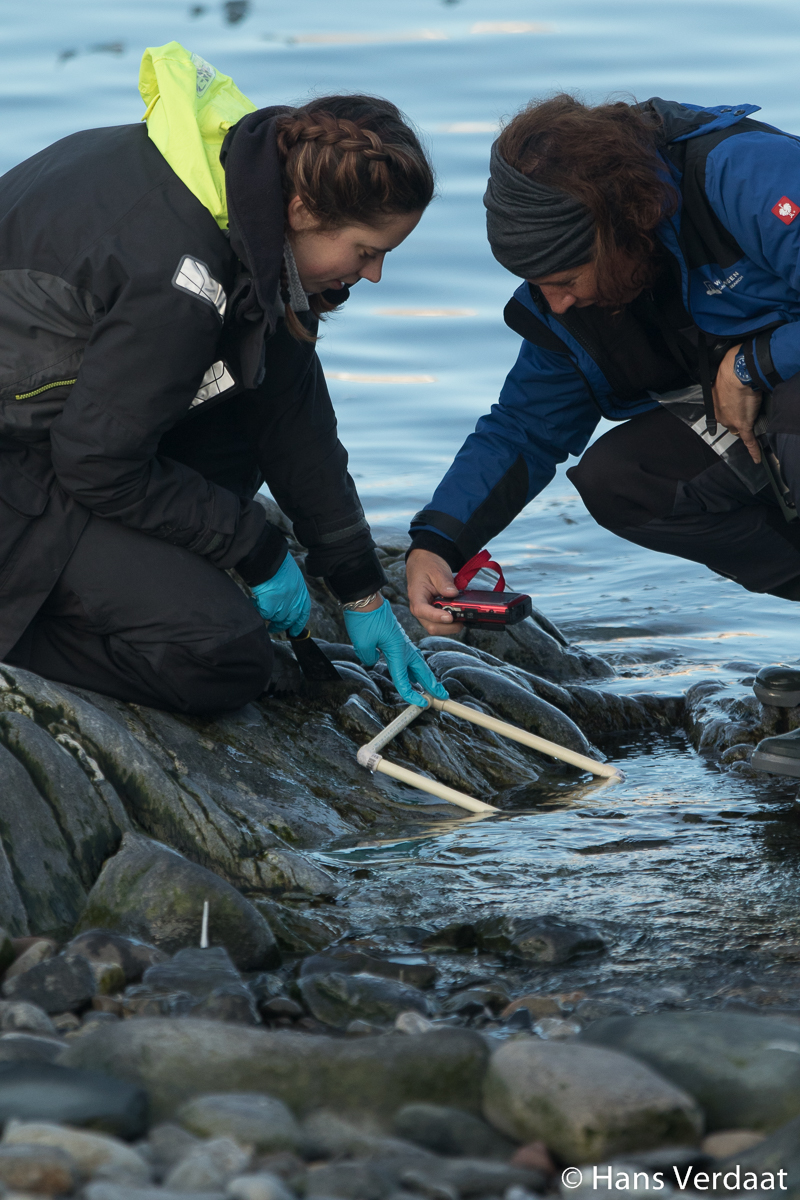 Sampling the hard substrate at Hornsund (photo by Hans Verdaat)