How much mercury do we find in bottom-dwelling organisms of the Arctic fjord?

After a short and beautiful flight over the glaciers to the research station Ny-Ålesund, in the northwest of Svalbard, we settled in our house. One of the yellow houses of the Dutch Arctic station. We were happy to find out that all our research equipment had arrived safely, so we could move into our ecotox lab straight away. For the next day we had already booked the Teisten work boat, so everything needed to be prepared for a first sampling day out on the water.

First sampling day near the mine

The first time on the water is always a bit hectic, developing the best working process with the equipment and research team. After a few hours everything worked fine and we were able to complete the whole sampling we had scheduled for that location. Fulmars joined us around the boat during the whole sampling.

So what did we do? We took grabs of the muddy seafloor and filled plastic and glass jars with this chocolate mousse coloured mud. After we filled enough bottles we sieved the mud and collected the shellfish and worms living in the mud. Back on land we froze the samples so we can analyse them later in the Netherlands.

After we completed the sampling in the fjord, we continued our sampling on land a few days later. We followed three meltwater streams that run through the mine and sampled mud from the streams. The coal mine has been closed since the early sixties of the past century. A major accident was the final cause of the closure and the mine rubble is still present in the landscape. The view from the mine area on the fjord is beautiful, looking at several glaciers surrounding the water. During our sampling we noticed two reindeer mother-calf pairs looking at us curiously when we were kneeling down in the mud.

Project on mercury and PAHs

We take these samples to determine how much mercury and PAHs are in these samples. This project is a joint project of Wageningen Marine Research and the Arctic Centre of the University of Groningen. Which was granted by the Svalbard Environmental Protection Fund. Frits Steenhuisen of the Arctic Centre developed a model that simulates global mercury emissions for UNEP and the Arctic Monitoring and Assessment Program of the Arctic Council. With the results of our samples we can contribute to research on the impact of mercury and PAH’s on the Arctic. By taking samples near a local coal mine and far away from a local source of mercury, we can obtain more knowledge on how much of the mercury comes from a global source and how much input there is from local sources, such as a coal mine.

The sampling near the coal mine went very smooth. The sampling of the reference locations however, turned out somewhat more challenging… 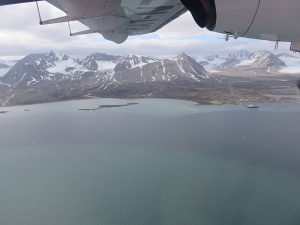 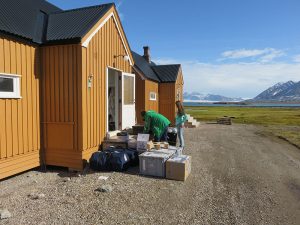 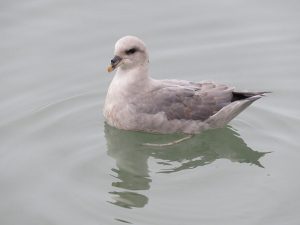 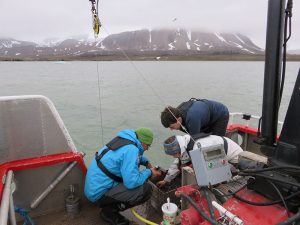 Sampling in the fjord (Picture by Martine van den Heuvel-Greve) 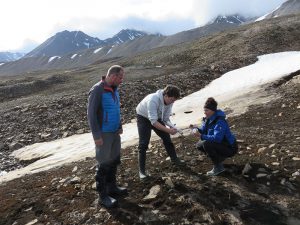 Sampling in the mine area (Picture by Mare van den Heuvel) 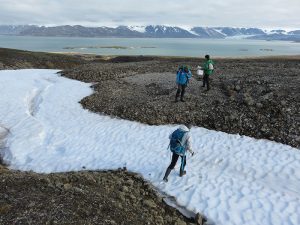