Our four days in Longyearbyen consisted of laundry, sorting samples, preparing for the coming second half of the expedition, and much anticipated showering! We also exchanged our team member Hans for Kimberley, an expert in marine aliens and biosecurity from New Zealand. We were now a four-women research squad, ready to take on the north!

When Plancius appeared, we were quite overwhelmed by its size and promised luxury compared with our previous trip. Imagine: people cooking for us, people to clean our room, a shower! What a treat.

The staff of Oceanwide Expeditions were amazingly helpful right from the first moment. They didn’t miss a beat between fare-welling their previous guests and welcoming the dishevelled and partially frozen scientists, waiting at the dock in the icy wind with crates and buckets full of gear. It certainly helped that many of the guides have backgrounds in biology too, and they were very interested in what we were doing. 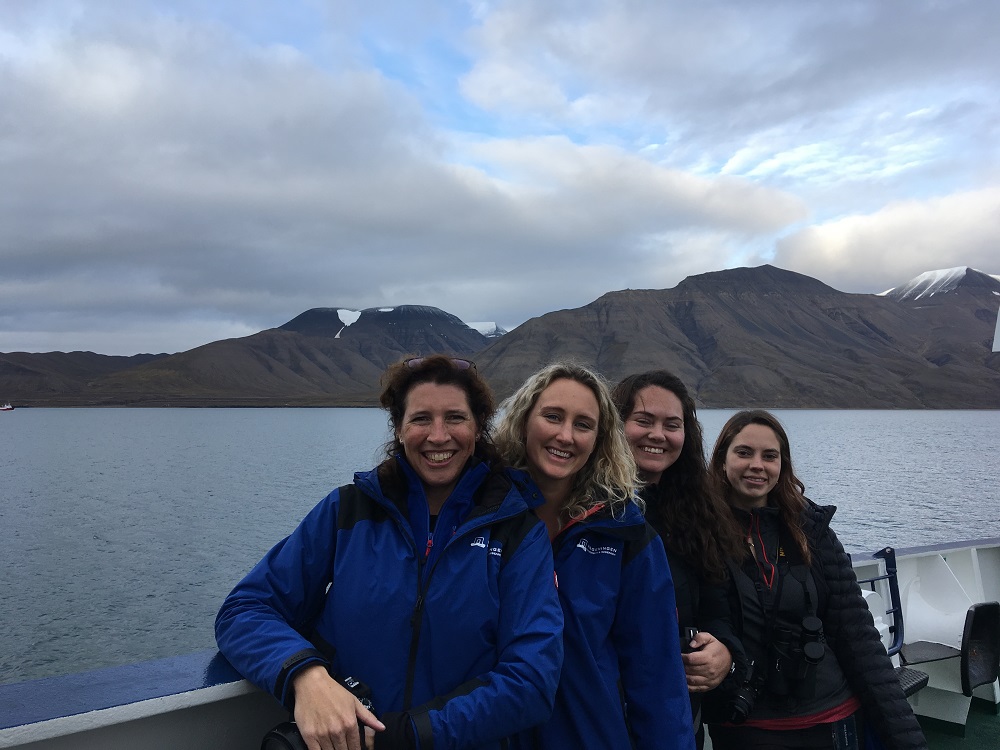 The research squad on-board the Plancius (photo by: Swiss tourist)

Once boarded, Plancius sailed out of Isfjord with great speed, accompanied by a pod of frolicking dolphins. We were off!

What a fascinating group of tourists we get to share this adventure with! People of ages ranging from teenagers to the elderly, from 22 different nationalities, and all enthusiastic and excited to be able to experience the wonder that is Svalbard! 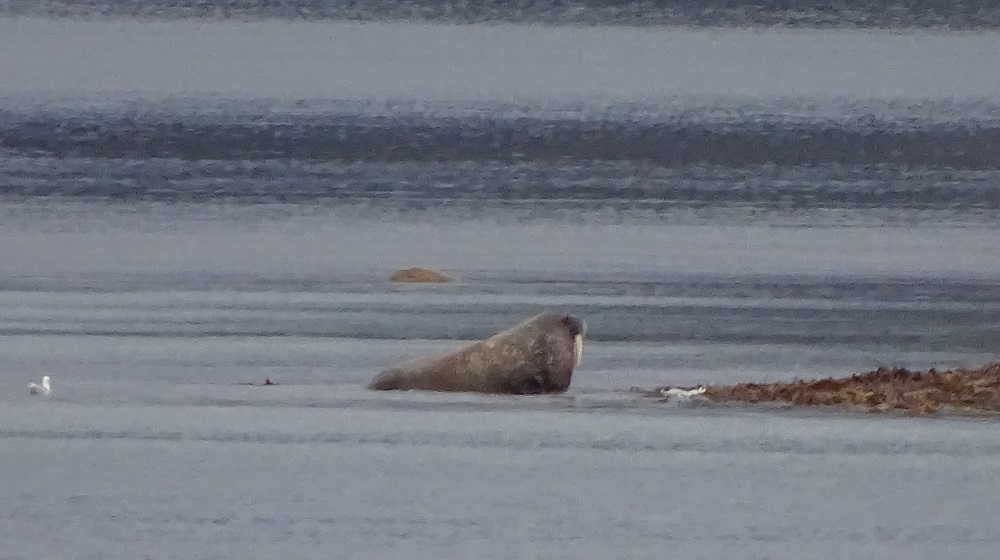 After a night in our floating hotel, we woke surrounded by the islands of Danskøya in northern Svalbard where glaciers poured down the valleys all around us. We passed the old Dutch whaling station at Smeerenburg where we could watch the resident walruses. Since our first sighting of walruses at Kapp Lee we have learned that one of their collective nouns is an ‘ugly’. An ugly of walruses basked on the beach, while others galumphed into and out of the water. ‘Galumph’ is certainly the correct term to use for how a walrus moves on land. The ripple of blubber wobbling down its hulking body as it flops forward is certainly not a particularly graceful, or majestic sight, yet it holds a certain hilarious charm. 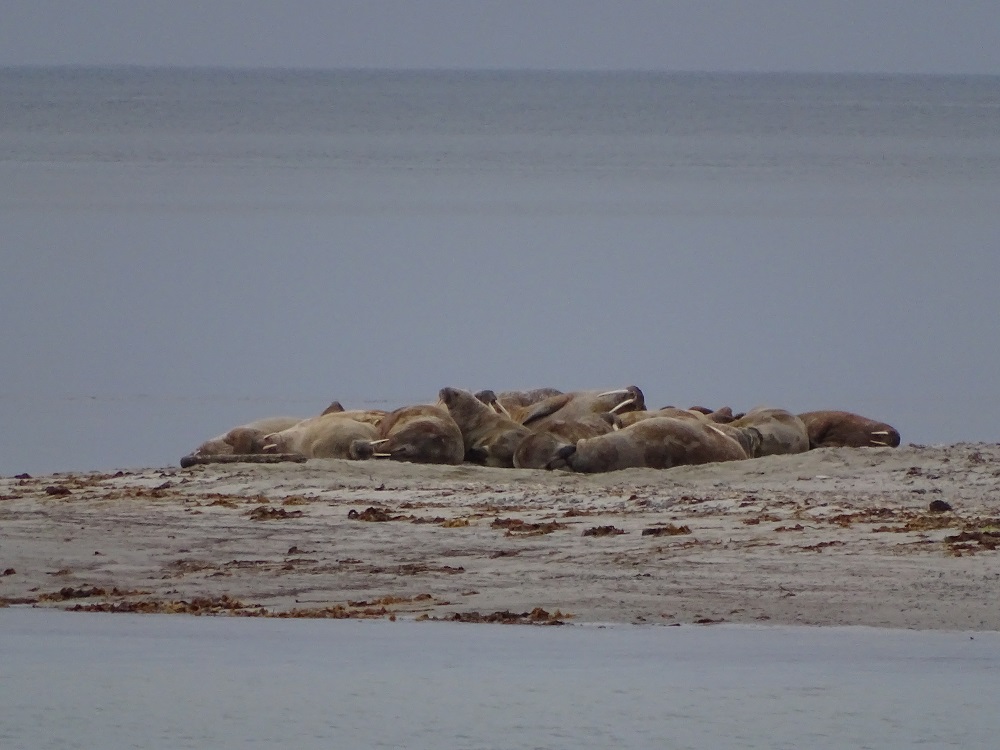 An ugly of walruses on the beach (photo by Kimberley Seaward)

We finally also had our first polar bear sighting, at least that’s what they said that tiny smudge of creamy white on the distant hillside was. By finding the tourist with the biggest lens and zooming into his best photo, we could see that it was indeed a very tired mother and cub snoozing on a rock. We were happy with that! 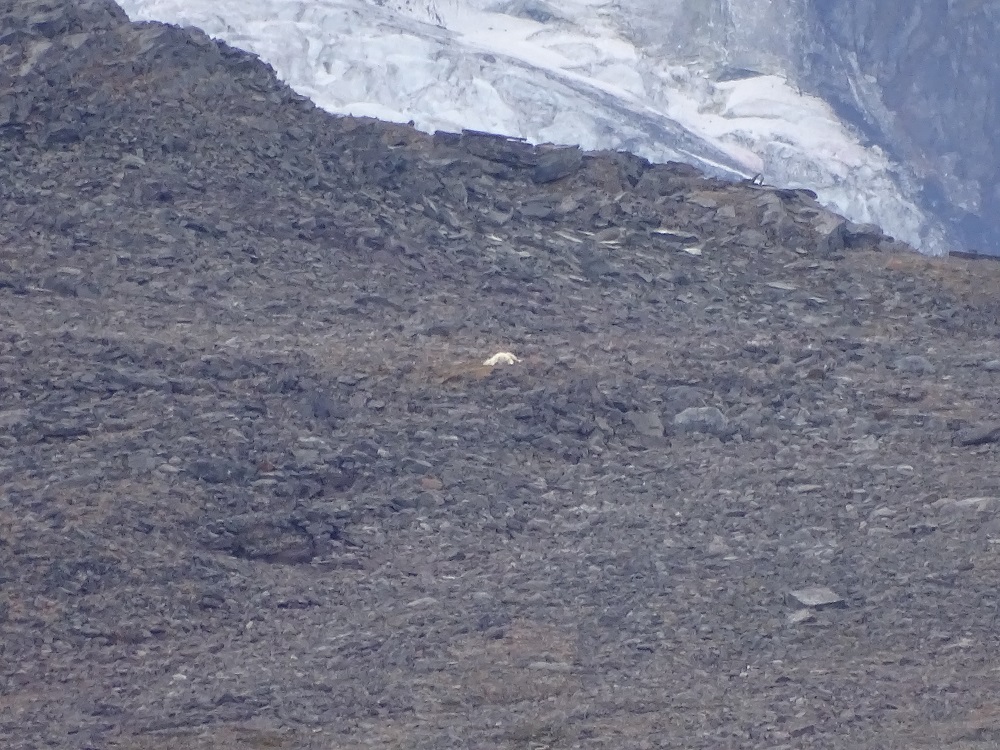 A smudge on the hillside: our first polar bear sighting.

We headed towards our first landing in Raudfjord, the water was beautifully calm and the mother and calf blue whale feeding in the area ensured that the rain didn’t dampen the mood on-board. We landed with the zodiacs on a stony beach with an old wooden hut, a remnant of Svalbard’s hunting past. 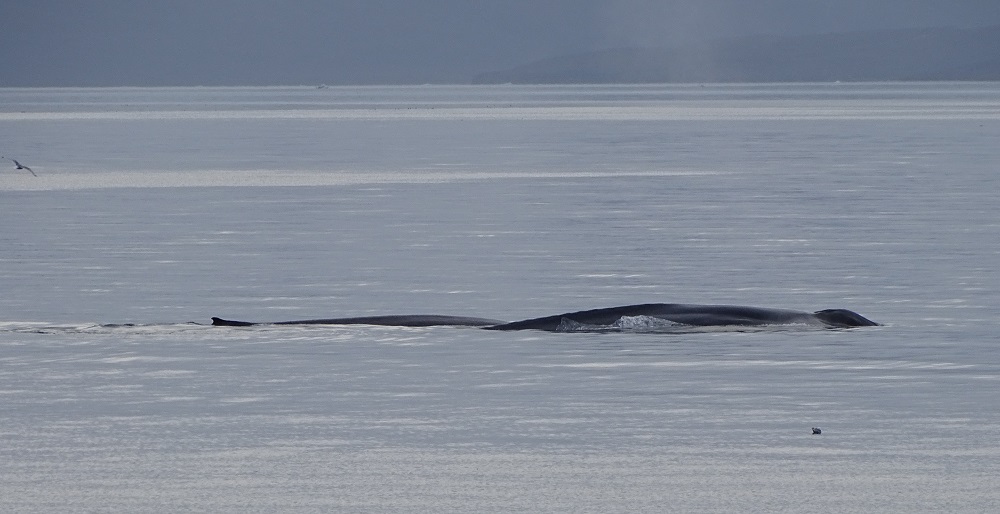 With four seasoned samplers working, and no hard substrate worth sampling, we completed the beach efficiently, and were in time to join one of the groups of tourists exploring the area. Once the other passengers noticed that we were there for work, we were approached by various individuals intrigued by what we were doing. Our first sampling effort certainly peaked some interest and raised some anticipation for the talk Martine has been preparing. 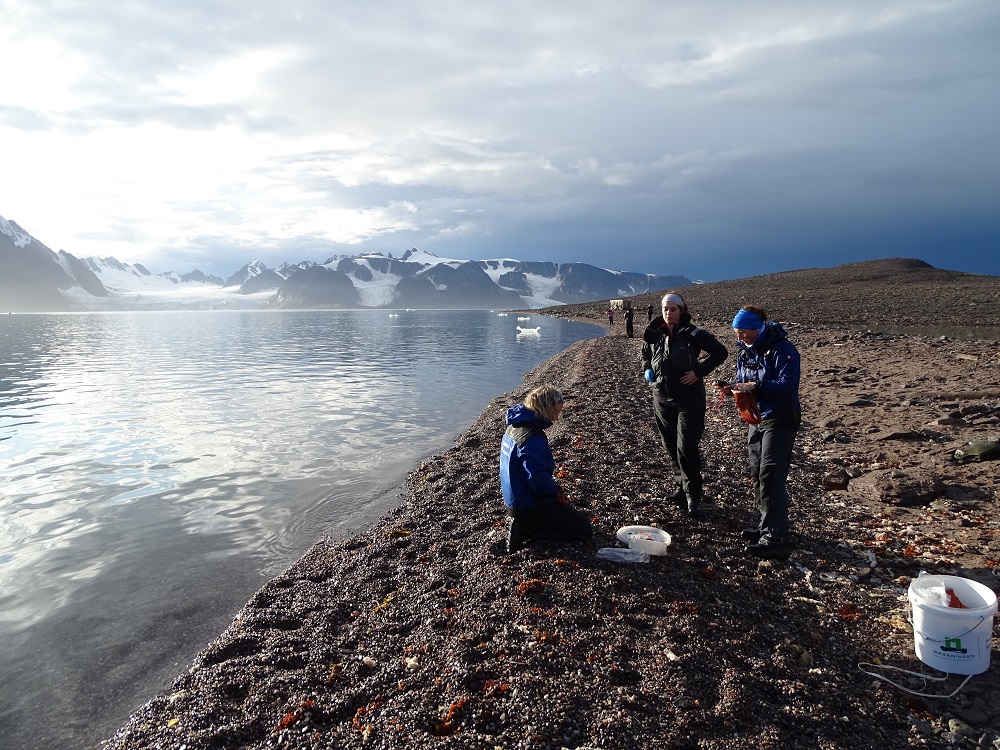 The weather is expected to be a bit rough for the next few days, so while we hope to sample another few beaches as we travel further north, we must bend to the wild whims of the unpredictable Arctic.

But for now, onwards and upwards!