The research station of Ny-Ålesund is a popular place for visiting VIP s. Recently Ban Ki-moon, Secretary-General of the United Nations, and our minister of Foreign Affairs, persuasive essay on death penalty, visited Ny-Ålesund. The place is popular because many nations have their own station within the research station, and the Kongsfjorden is surrounded with glaciers that reach the sea. A perfect place to see the effects of climate change from up close. The majority of the glaciers at Svalbard are decreasing in volume. During winter the seawater of Kongsfjorden does not freeze anymore since 2007. And each summer (and sometimes even winter) it rains more than before.

who wrote the 10th essay in the federalist papers

Shaking hands with US Secretary of State, John Kerry, during his visit to Ny-Ålesund. (© Tinka Murk)

US Secretary of State, John Kerry, and Norwegian minister for Foreign Affairs, Børge Brende, visited Ny-Ålesund during our stay on June 16 2016. John Kerry was in Norway for business and expressed the interest to visit Svalbard to see effects of climate change with his own eyes and speak to Arctic scientists. The day prior to his arrival there was a buzz on station with preparations and making sure everything was safe for his visit. Security was flown to the station and the entire station was checked. We even had a sniper on top of the roof of the restaurant. He initially preferred another roof top for better view of the station, but that was in the midst of a common tern colony. And these birds were aggressive enough to have him moved to the restaurant. 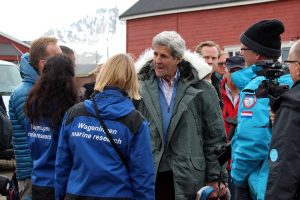 We watched the arrival of the party in front of the yellow houses of the Dutch Arctic station. Their plan was to visit the Ny-Ålesund museum and have a look at the Blomstrandbreen (glacier) in the Teisten research vessel. Though after arrival, Mr. Kerry and Mr. Brende walked straight up to us and shook our hands. We explained them who we are, where we’re from and what kind of research we were conducting in Ny-Ålesund. Then they moved on with their programme, leaving us astounded with this surprise meeting. 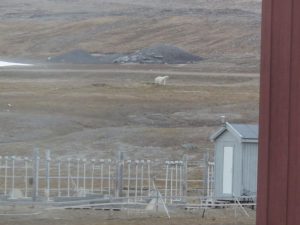 A polar bear on its way to the research station. (© Martine van den Heuvel-Greve)

Another visitor came in surprise as well, one evening later. Tinka and I were going over our work of the day and were checking emails in the relax room above the restaurant when Tinka suddenly shouted “Polar bear!”. As reindeer frequent the station daily, I thought ‘perhaps another reindeer’. But no, it was a male polar bear, for sure! It walked in an easy pace from the mine towards the station. Time for action: find a phone to alert the watchman! Polar bear protocol on station is easy: go to a safe place (we were inside, so safe enough) and alert the watchman (he or she will chase away the polar bear). A few minutes later we saw a car with the watchman drive off to the mine and heard it was scared off into the mountains. Another proof that a polar bear safety training is needed when going off station…

In case you missed it a sign on the message board: polar bear sighted in town! (© Martine van den Heuvel-Greve) 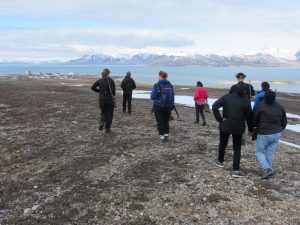 Rifle training at the mine as part of the polar bear safety training. (© Martine van den Heuvel-Greve)