The walrus, the guide, and the polar bear

The weather turned and the sea got rough. The doctor on-board was quite busy giving out ear patches for sea sickness. So far we have managed to sample two beaches on this trip, and we are quite happy with that. Along with our partners in other parts of Svalbard, we have already completed the minimum number of beaches we had planned on, so anything more is bonus.

As we travelled along the northern coast of Svalbard in the evening, having left the shelter of Liefdefjorden, the expected effects of the storm in the Arctic sea hit. The swell, the pitching and rolling quickly became too much for many, and most people retired early to their beds to wait it out. By morning we had reached the shelter of Hinlopen Strait and the seas were much more friendly to our churning stomachs.

After breakfast the guides began preparing for another landing on the beach at Torellneset. There was another ugly of walruses that we would be allowed to observe from land. I was very excited. As this blog has made clear, I have a particular affection for these enormous blobs of whiskers, teeth and blubber.

According to protocol, the first scouts scanned the land from Plancius, and then from the zodiacs before landing and scanning the beach to make sure it was safe.

Then someone spotted a polar bear. 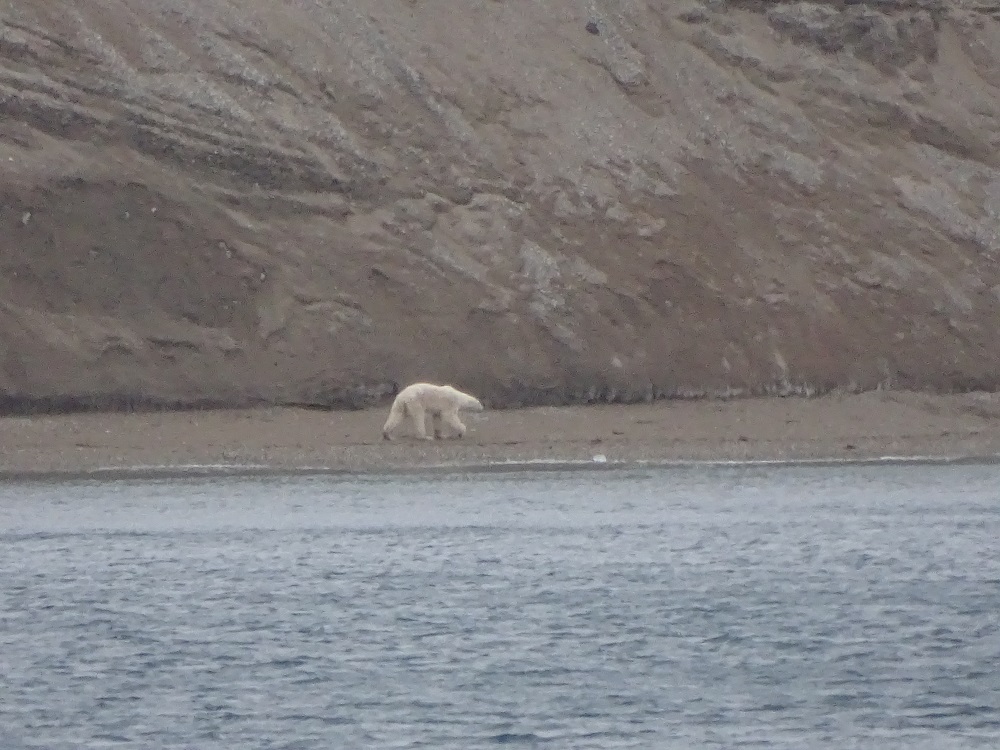 Through binoculars and long camera lenses we watched in suspense as the guides onshore promptly headed to the landing site in a tight group. Watching how the guides responded, we could definitely appreciate the amount of training they must have had! 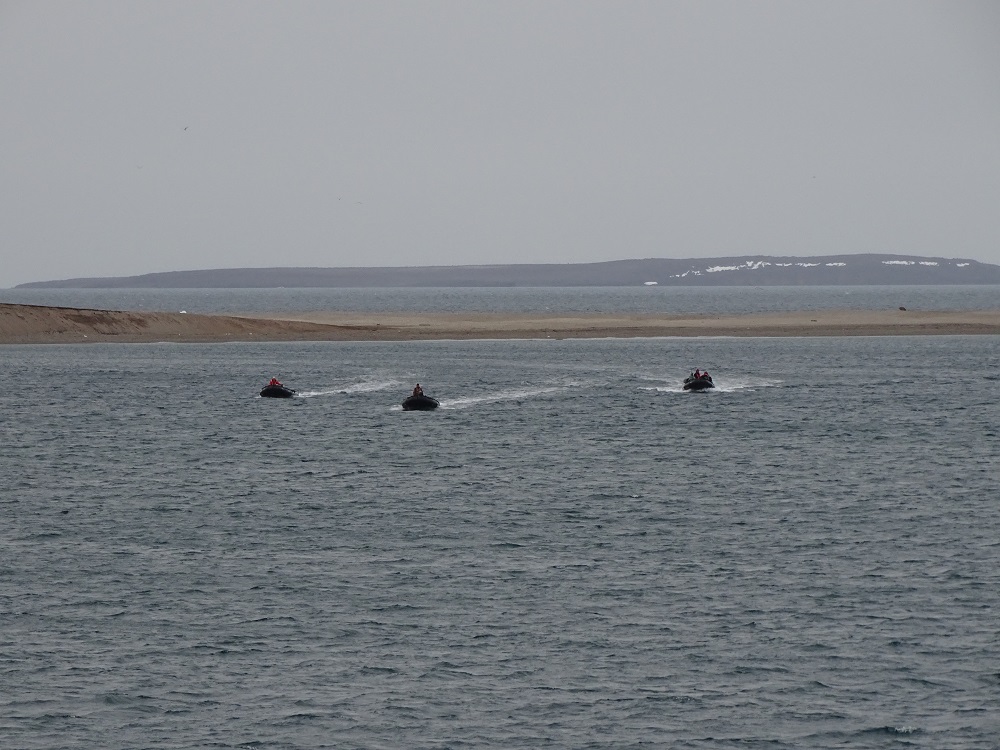 The bear was skinny, obviously hungry, and very determinedly marching towards the landing site from the other direction with its eyes fixed on our guides. Even from the boat we could see the sunken belly and protruding hip bones through the fur of the bear. This bear looked hungry! This desperation had overridden the bear’s caution and made it particularly dangerous. Thankfully the guides were all very professional, and calmly, yet quickly got back into the zodiacs. The bear stopped to sniff around where our guides had been only minutes earlier, lamenting the meal that just slipped away, then continued on towards the walruses in search of lunch.

While an adult walrus is much too big and full of blubber for a single bear to handle, this group had young with them. If our bear could get just one, it would be enough of a meal to last the bear another few weeks. A single large adult male walrus was lying higher up on the beach, and didn’t seem particularly bothered by the approaching bear. However in solidarity, and protectiveness of their young, a line of walruses emerged from the water as the bear walked past. It must have been quite an intimidating sight for an emaciated bear to be confronted with at least 15 enormous, angry and protective walruses making it clear that no bear was welcome. For us though, a nature documentary was unfolding live before our eyes! 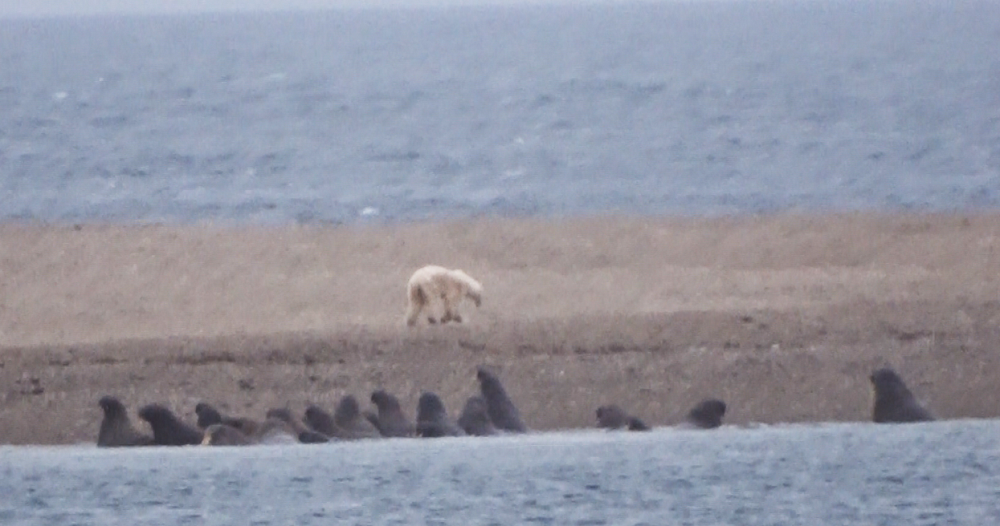 The bear, understanding that it was not worth the risk to try its luck on a walrus pup, circled back and eventually lay down higher up on the tundra.

So no landing for us this time. We left the disappointed bear to pick at a fox carcass and sniff around the bird nests as we headed to Faksevågen where there was no polar bear, and sampling was again possible. 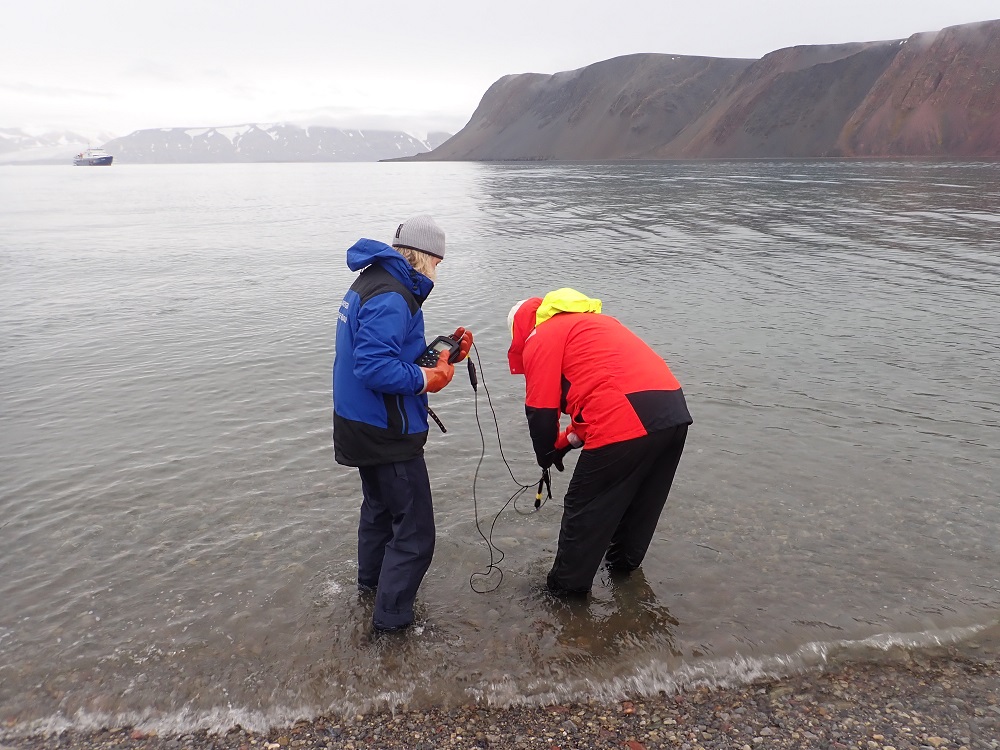