Blog #3 already; I cannot believe that two weeks have already passed by! Something is telling me that these three months will not last long. To be correct: two and a half months from now on. However, time is just an illusion and when I think of all the things we have done and seen, I can make a surprisingly long list.

Because I promised last week to explain something about the bird song of the Lined Seedeater, I will give only a short summary of the things that happened this last week.

First things first. You will probably have watched the news or read the newspaper about the dam break in Brazil. Until now, the death toll is at 60 persons and hundreds are still missing. This dam break is a real environmental disaster as the water contained many poisonous substances. Even though this all happened very close, we are all safe here and we do not experience any consequences of this tragedy. We are the first town that can continue to drink water from the (filter)tap. Strangely enough, our busy life on the campus continues as if nothing happened. 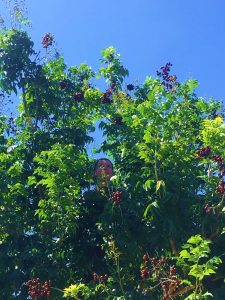 I had to climb a tree to find my very first nest!

First, I can proudly say that I found three (theoretically two) new nests this week which means two chocolates from Dalila (we already have enough beer in the house). Unfortunately, we figured out that yesterday, both nests were already predated as well… This predation means that we have to spend many hours again to follow the parents until they start building a new nest. Luck followed by bad luck.

Next it was Yvonne’s birthday last week so we went to the local pizzeria and had some delicious pizzas. Have you ever seen a pizza with cheese processed in the crust? Well, it is worth trying! Unless you do not like cheese. Talking of people who do not like cheese, Tessa arrived a day later and our Dutch team is now, except for one person, complete! 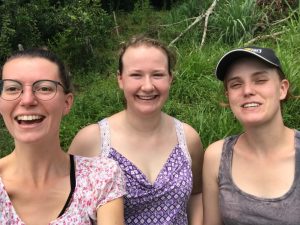 The Dutch team so far: f.l.t.r. Melindy, Tessa and Yvonne

It turns out that Tessa is much better in cooking compared to Yvonne and me. Before Tessa arrived, Yvonne and I tried to make a cheese sauce with flour to pour over our broccoli. However, the bag with white powder which we believed to be flour, turned out to be porridge. That night, the sauce had a bit of a strange taste and structure to it…

Now with Tessa in the house, food is getting better, but food products keep disappearing mysteriously. For example, we twice bought a large piece of cheese and both disappeared before we could lay our hands on it. Fortunately, Brazilian holiday will be over soon and the university will open half February which means we can buy ourselves cheap lunch and dinner at the canteen there without making a fight whose food is whose.

With the ending holidays, it is already getting busier on the campus which is not very supportive for my research. Recording birds is extremely difficult with cars passing by and people asking what you are doing. Therefore, I will try to gain as much recordings as possible before the university starts again. In that way, I can analyse these recordings later.

We also had a R course this week given by Filipe. R is a program which helps you analysing your data. I still have to practise a lot to get familiar with it as I am not the most convenient person with computers and data.

However, something that I can explain to you, considering computers and data, is how to interpret song recordings of the Lined Seedeater. Welcome to the world of acoustics…

A short introduction into bird song

Although I just explained that I will start analysing data later when the university is at its busiest, I could not resist to start analysing my first recordings to see how bird song looks like when digitized. Below I will show you the spectrogram of a bird song recording of a black-and white male with ring colour combination Aluminium-Orange-Orange-Orange (AL.OG.OG.OG).

The spectrogram of one bird song of a Lined Seedeater male

In order to explain the bird song and the term ‘song complexity’ in a clear way, I made a short video. 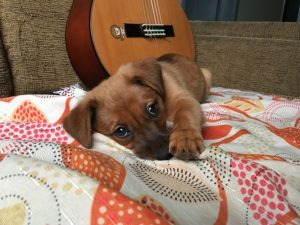 At last a totally different subject which I need to tell you is that during Tessa’s first field day, she was stalked by a stray puppy which she eventually brought home. We tried to clear the pup from ticks and flees by washing it with coconut shampoo and this resulted in the pup being baptised as ‘Coco’. The pup stayed here for four days while we tried to find her a new owner. While I was writing this blog during the morning, the pup was picked up to be united with its new owner. We are really happy for her having a new home, but we will miss her. As you can see, many unexpected things happen in the house.

Next blog I will try to explain the researches of other team members concerning the Lined Seedeater and I will give a report on our first real trip outside the campus site.