This week, the last member of the Lined Seedeater team 2019 joined us: Robert! Together with Alexia, a Brazilian team member, and a personal driver from the university I was ‘escorted’ to the airport just in case something went wrong again with luggage and I had to translate something from Portuguese in English. Luckily, Robert and his luggage arrived with the same plane. However… After thirty minutes of waiting at the arrivals and not spotting Robert in the crowd, we started to become anxious. We texted Robert, but our messages did not arrive on his mobile. Slowly we started to ask people from LATAM airlines whether he had arrived or not, but they could not tell us anything. Where was Robert?! 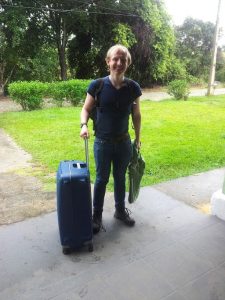 After a moving morning, Robert finally arrived at the house

After a while we desperately showed Robert’s WhatsApp profile picture to employees of the airport and surprisingly enough one of them recognised him! He told us that he had taken the bus to the city center which absolutely made no sense since from this point, there was no way he could get to Florestal by public transport. Without having another option we drove towards the city center. When we almost arrived there, Alexia was suddenly called on her mobile by… Robert.
He apparently had taken the bus toward Pampulha airport which was only required for Tessa an me so that Filipe could pick us up more easily from his parent’s house. Now that Filipe was back in The Netherlands, Robert did not needed to take this bus. Probably it was a miscommunication between Robert and the people that arranged his transport. Nevertheless, we found Robert at the airport of Pampulha and so we went home to Florestal. 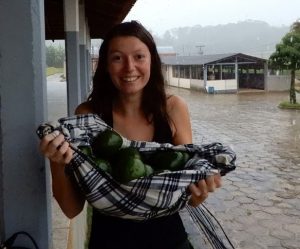 22 avocados collected during the non-stop rain

Last week’s blog started with the description of bad weather. Unfortunately, this continued for a few days this week. Some days it was clear that no research could be done, because it was raining cats and dogs from the start of the day. However, other days were more treacherous as they, in the first instance, seemed to be promising, but when arrived in the field, the hell broke loose as so to say in Dutch. In the meantime while waiting for the rain to stop, what of course did not happen, we entertained ourselves with playing card games. Also we had the luck to have shelter next to an avocado tree. When we eventually decided it had no use to wait any longer for the rain to stop, I took in total 22 avocados back to the house! We use the avocados for everything; in our dinner, on sandwiches, as a snack and even as a face mask!

Because of the bad weather, I could not record for only a few days. The rest of our team was less lucky, because we currently have a lack of nests to investigate. While Robert was getting in the swing of doing field research, the rest of the team actively searched for new nests so that Yvonne and Tessa could start doing research again. In total, we found a small number of six new nests. The best explanation of this small number is that last week, a lot of nests got predated or have successed. This week these couples are probably still searching for a new spot to build their nest and hopefully next week we will be rewarded with many new nests!

Unfortunately more bad things happened this week. My keyboard of my tablet suddenly stopped working and I spend two days trying to repair it without positive result (some weird Bluetooth disconnection). This is very unfortunate as I really require two screens to analyse my data; on one screen I study the digital display of the bird song while on the second computer (my tablet) I type all the data in an Excel file. Fortunately, both Tessa and Dalila do not use their laptop very often and they offered their laptops to be used as second screen. Because Tessa’s laptop resembles my tablet keyboard the most, I started to work on hers; thank you Tessa (and Dalila)!

Despite the setback of the keyboard, I reached a total of 300 recordings yesterday! Although I might already have enough data to significantly prove something, I will continue to record the male song for a while to be really sure about my data and the outcomes. Also I can start analyzing the sounds/calls/songs that the female makes on the nest retrieved from the nest videos made by Yvonne, see below. The following weeks I will not be bored for sure! 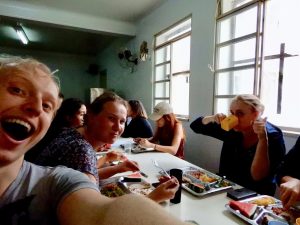 Our first lunch from the canteen

It took a while, but we finally have access to the canteen of the university! Our first day was a complete shock though; in front of a building was a queue of university students mixed with high school students (and four random tall white Dutch persons) that lasted for more than a hundred meters.

While we waited in this queue to enter the canteen, we felt quite uncomfortable as almost everyone was staring at us (and a week later this has not changed). Even though I tried so hard to get a tan, I am still defined as ‘white’ by the Brazilian people which I think is quite unfair.

Nevertheless, when we entered the canteen, some of us were confronted with scenes from ‘Prison break’ or ‘Orange is the new black’. Cooks of which we cannot see the faces hurl some special meal of the day on your aluminium tray after which you can join rice and beans yourself at another table. Yes, every day it is rice and beans with a little bit of salad. Now you might get a wrong impression of this description, but the food is actually quite good. Especially after a day strolling through the field. Plus, it is incredibly cheap! The price of lunch and dinner is R$ 2,25 each which equals approximately 70 Euro cents! I am not at all bothered to eat this for the next two months.

Finally, as promised last weeks, I will discuss with you the researches of Tessa and Yvonne. Let us start with Tessa. Tessa’s main question is whether there is a difference between the role of the male and female Lined Seedeater per nest during nest predation. In order to answer this question, Tessa installs a bird model close to the nest and observes the behaviour of both male and female with aid of a camera. For example, she counts the number of warning calls per bird and the times a bird visits the nest. For her experiments she uses a stuffed toucan bird to imitate a predator. As a control, for which she assumes birds will not be scared of, she uses a stuffed pigeon. Beside her main question, she has, just like any of us, several subquestions. There could for example be a difference in predation behaviour between black-and white males and brown males. 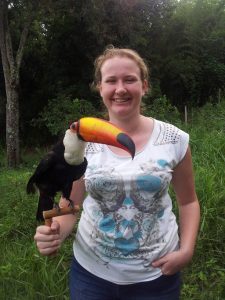 Tessa with her Toucan model

What does Tessa’s day look like? First she decides which nests to study that day, because she only needs nests containing nestlings with an age of four up to seven days. When going to the field, she brings a big bag containing the stuffed bird models, a camera, camera holder, notebook, concealing cloth and equipment to install the model. Before she starts her experiment, she places the model bird close to the nest concealed with a cloth in order not to scare the birds yet. First, she observes the male and female bird and waits until the parents have visited the nest twice. When both parents have left the nest, she exposes the model to the birds and starts filming the surroundings and the nest from a distance (she does not want to be the source of warning calls herself). After ten minutes she stops the recording and back in The Netherlands she will analyse the videos to get her data.

Every nest receives two treatments: one with a toucan and one with a pigeon. Of course, there are always some setbacks during field research. For example, her stuffed toucan is not the only toucan on the campus. Last week she was doing her experiment with the pigeon when a group of real living toucans arrived near the nest. Despite the fact that she used a model bird, she received a lot of warning calls. Field work; never as easy as you think it will be…

Let’s talk about Yvonne’s research. Yvonne is the real bird-stalker of the team as she places a camera very close to the nest and observes, among others, the number of visits of the parent birds, what type of food they give their offspring and whether one nestling receives more food from a parent compared to another nestling. Eventually, Yvonne likes to figure out whether there is a difference in parental care between black-an white males and brown males.

Her day starts with placing a go-pro camera near a nest of interest. Although most nests are well hidden, she tries to hide the camera as good possible; we do not want to have the thieve-story again. Her aim is to film the nest for a total of four hours. In order to do so, she has to change the memory cards of the camera every two hours.

Yvonne has a total of three cameras available for her at the house, so during a day, she is mainly running from nest to nest and to the house to change memory cards in time and empty them on the computer. In the video below you can see one of her recordings. This nest (LSP050) has a total of three nestlings. First you can see the female feeding seeds to her offspring and a bit later the father will arrive with seeds as well to give to his offspring. This nest was one of the first nests to be filmed. Eventually, all three nestlings fledged which is very good.

Hopefully I can tell you next week that the number of nests has increased. What I will definitely discuss next week is Roberts research and many spontaneous, unpredictable other things.