#8 Away from the field station

I must stop promising you things. I promised you to write the next blog before Tessa and Robert were leaving and here I am… Yvonne just left the house to go back to the Netherlands and Dalila and I are the only ones left in a house that a week ago was a shelter for five people. Nevertheless, I am going to tell you everything of our adventures last weeks. At the same time, this will be my last blog in Brazil as the breeding season of the Lined Seedeater slowly comes to an end. 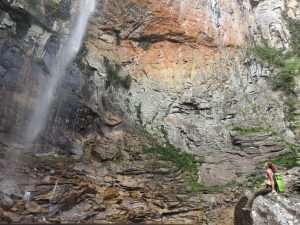 Looking up at the 273 meters high Tabuleiro waterfall

I will start with our first adventure; a 3-day expedition through a national park Northeast of Belo Horizonte called ‘Serra do Cipo’. Leo and two of his biology-friends Guillaime and Lillian guided us through beautiful landscapes with mountains, waterfalls and… a lot of birds! We visited the third biggest waterfall in Brazil called the ‘Tabuleiro waterfall’. To get under the waterfall, we had to cross a lake containing very dark coloured water. Swimming in water of which you cannot see the bottom is one of my biggest fears, but that day I made an end to this phobia and as a reward, we could enjoy the beautiful view of water falling down (on us) starting on a height of 273 meter. 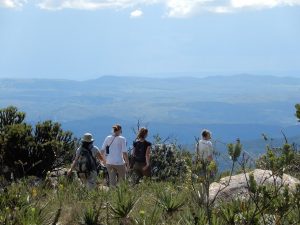 The team walking through the beautiful nature of Serra do Cipo

Beside the Tabuleiro waterfall we visited three other worth-to-go (not everyone might share this thought with me) waterfalls. This whole adventure truly felt like a real expedition and driving on dirt roads, sleeping in a broken tent, a beautiful view of the milky way with falling stars and waking up in a small village surrounded by mountains covered in mist made this feeling only more complete. All in all, this was a great time! 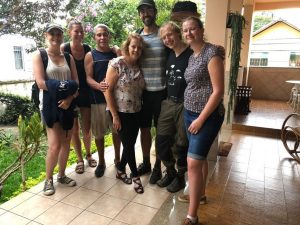 Finally, a picture of our Dutch team, Leo and his wonderful parents. What food did they give Leo to get this tall?!

When the adventure of Serra do Cipo ended, Leo dropped us off at his parents’ house where we could enjoy a wonderful meal (again) before taking the night bus to our next destination; Guarapari.
The 9-hour drive at night was, as expected, a nightmare for me as I cannot sleep in night busses. I was really happy I downloaded a whole season of The Bridge on Netflix though. 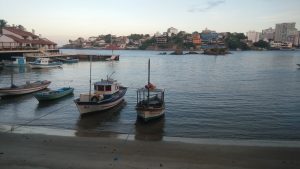 When we arrived at Guarapari busstation, we took a taxi to the apartment of the parents of Leo’s wife Renata. We first thought we had to share the apartment with these parents, but it turned out we had the whole apartment for our own! We instantly dressed ourselves for the beach and when we took our first dive and stood eye-to-eye with sea turtles, all the thoughts of night bus evaporated in the bright sun. We had two great days in Guarapari with cheap food, very nice acai ice-cream, and a great walk around an island. 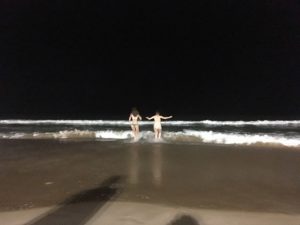 The third day we drove with our hired car via the coastline to a small idyllic village called Santa Teresa. Halfway our trip, Leo arranged that a friend of him could guide us through the Paulo Cecar State Park which was a good morning walk. Unfortunately, the animals in this park did not really want to show themselves that morning, so we enjoyed the beautiful views instead.

In Santa Teresa, we stayed, due to Leo’s suggestion, in a wonderful hotel in the middle of a colourful valley. After a very peaceful night, we visited a park where they had a lot of hummingbirds flying around. Eventually, we had to drag Tessa and Robert back in the car to drive to Vitoria. We dropped our car in Vitoria and Tessa and I had our last goodbye-dive in the Brazillian sea. Unfortunately, our happy trip came to an abrupt end and we took the night bus back to Belo Horizonte that night; again this was not a success for me…

The hotel and its ‘garden’ in Santa Theresa

Final days in the field

When we returned to the field station, a lot of nests contained nestlings which is very good for all of our studies. For a few days, we were in full swing of doing research again and finding of new nests continued. I found two nests that were built above the great lake in the fish farm. In order to gain data from the eggs that were in these nests, I had to swim to the nests, pick up the eggs from the nest, swim back with the eggs trying to keep them as dry as possible, measure them on land and swim back again. Including the fact that swimming in this lake is actually forbidden, this was certainly the best measuring day of these whole three months! 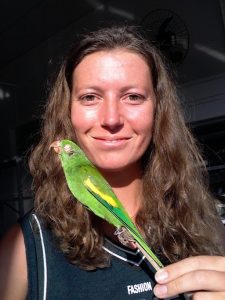 Happy with my result of Leo’s taxidermy class

A few days before Robert and Tessa left, Leo organised a taxidermy class for us. Each of us got a bird that was found dead somewhere on the campus and we could all prepare the birds ourselves. A week later, Yvonne and I could observe the end result and I must say that I was very proud with my parakeet!
With a great farewell committee, Tessa and Robert left the field station. I accompanied them to the airport in case anything went wrong (again), but fortunately this was not the case. It felt really weird to say goodbye in Brazil knowing that I will see them again in a few weeks in The Netherlands.

Fun fact of the day

During a few rainy days after Robert and Tessa left, I started to organise my data in Excel. I did some great discoveries during this organisation. In my file, I have descriptions of males (ringed and unringed) together with their recording number and analyse of song. During these three months, a lot of unringed males were caught in the field with a mist net and ringed. Imagine that some of the unringed birds I recorded at the start of my stay could have been ringed later on and after this, I could have recorded them again. In the field, you can never be sure that a unringed male you see on a certain spot is the same unringed male you saw yesterday on this same spot. However, due to thorough study analysis of structure, I managed to confirm that the unringed male from nest 72 is the same male as the ringed male of nest 99 that was built weeks later! I had more of these findings on three other males which makes my data (and those of others) more clear. I felt like a real Sherlock Holmes for birds!

Enjoying Brazil for the last time

Although I still have days to go, the day when I will be leaving this beautiful country feels so close already. In these three months I really started to fall in love with Brazil, its people and nature. To still be of any value, I check some nests every day before or after I go to Clube Campestre to enjoy having a swim and sunbath. It will be very quiet in the house now that my three Dutch companions are gone, but fortunately there is still Dalila!

As I said, this will probably be my last blog in Brazil and although I started this blog with saying I will not make any promises anymore, I will probably write another blog when I am back in The Netherlands. In this blog, I will give a nice overview of this whole adventure and I will try to explain the results of my research. You are not rid of me yet.