This fourth blog is written during the darkest day since my arrival. Since the start of last night until now it is raining and there are thunderstorms with some short intervals. In comparison with yesterday, the warmest and most humid day since January, today can be entitled as ‘coolest’ day. Secretly, I am relieved that today is my free day; a Dutch person that does not like rain remains a Dutch person that does not like rain, no matter if it is in the tropics or not. Fun fact (or scary fact): while writing this blog, something close-by was hit by lightning and the lights in the house died!

What happened this week? First, as odd as it might sound, I arranged with my team members that I could do my field research alone. That means that, beside bed- and toilet time, I finally have some time that I am totally alone. Do not get me wrong: people around you is fun and Gustavo is the best to guide you through the field, but when your house is also used as a field station, there is a constant stream of people going in and out of the house. Some time that you are completely alone is very scarce here.
I figured out that more of nature’s secrets can be discovered while being alone. This week I found new pairs of Lined Seedeaters, a new nest, a lot of potential places where there is probably a nest hidden, monkeys that almost come to sit on your arm and interactions among animals that you (at least I) could never have imagined.

Thieves in the field

Some very sad news for Robert is that some of his playbacks in the field are stolen. When Tessa and I had to get a playback at the end of the day, we only found an empty bag in which normally the playback and powerbank are hidden. The next day, another playback was stolen. Together with Filipe we decided that we could no longer place playbacks on the campus. Only the ‘piscicultura’, a remote area at the end of the campus, could still be used for Robert’s research. Of course, this is all very sad news for Robert and the stolen electronics were quite expensive, but personally I am a bit relieved to not wake up two hours before my own work starts and that after placing the playbacks, I do not need to wait another hour in the dark before the first bird can be recorded. This means that we can all get our desired extra hours of sleep during the night and we no longer walk like zombies through the house during nighttime.

A tour around Belo Horizonte 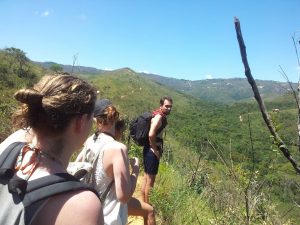 Making an attempt to find the ‘big’ waterfall

Last Wednesday, Filipe took us on a tour around Belo Horizonte. As Filipe already spend some days in Belo Horizonte Dalila, Tessa, Yvonne and I took the bus in Florestal early in the morning to meet him in Belo Horizonte. From there we had a quick tour through Belo Horizonte and we got to know the best places to go in our spare time. Soon we reached our destination: Macacos. Although ‘Macacos’ means ‘monkeys’ in Portuguese, there were no monkeys to be found in this natural park. The name Macacos merely comes from the name given to thieves in the early days that hid in this area. Maybe we could find our playback-thieves in here! During our visit, the only people we met were four boys that, just like us, discovered a small waterfall and took advantage of this situation to enjoy the cool water. We tried to find a bigger waterfall that was also supposed to be closeby, but unfortunately we were not able to reach it. However, we found another small waterfall in an almost magical place with light touching the water to create a beautiful dance of lights on the rocks covered with moss. In this place, Filipe surprized us with a delicious lunch which he has brought with him. All in all, Macacos was a beautifull place worth to visit again. 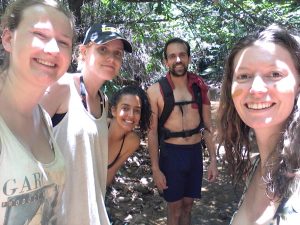 Fltr: Tessa, Yvonne, Dalila, Filipe and Melindy during our river hike through Macacos

After Macacos, we wanted to go to a restaurant called ‘Top of the World’ in Portuguese. When we arrived there, it was made clear why this restaurant was called that way, see image below. Unfortunately, the restaurant was closed. We continued our way back to Belo Horizonte and showed Tessa and Yvonne the place with the capibaras which Filipe and I visited the first two days of my stay. We ate some açai ice cream and finished our day with a Portuguese BBQ as supper. As a vegetarian I made an uneasy decision last week to start eating meat once a week. Being a vegetarian in Brazil merely means to eat egg with every meal as a meat-replacement and I felt my health deteriorate. When I am back in The Netherlands, I will be happy eating good meat replacers again! 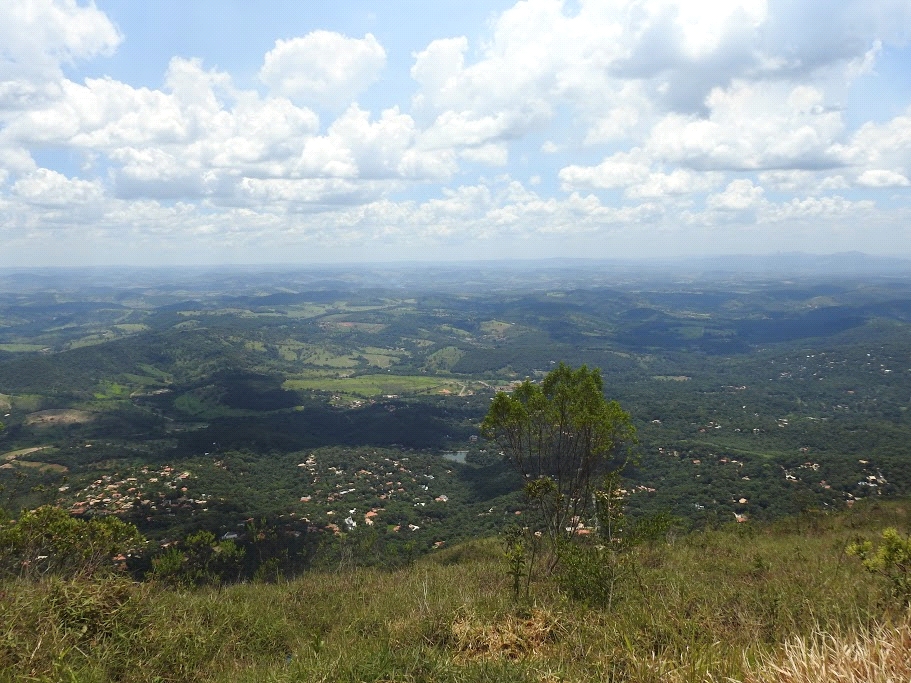 View from the closed restaurant called ‘Top of the World’ 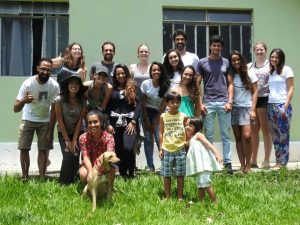 As the excursion ended, also the time of Filipe being in Brazil came to an end. Two days ago he left the house to spend his last days with his family in Belo Horizonte. Before he left, we took a group picture with the whole team (without Robert though). Next week he will fly back to The Netherlands to start a new adventure: being a dad! He practised his paternity on us already a bit and now that he is gone, we are left with four girls in the house. 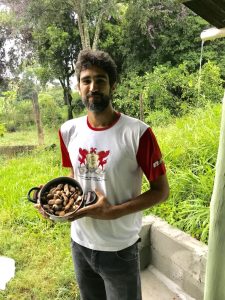 Leo with Tamarind fruit from his own garden

However, we still have our father-figure around called Leo. As I have probably already explained in a previous blog, Leo is the Brazillian head of our project. Not only is he guiding the project, he is also a very good cook! Once in a while he will bring a visit to the house with one of his creations; dinner, cake and all sorts of bread! I asked him a few times to pose with one of his super-sized breads for a picture for the blog, but the bread is so loved in the house that I have never seen a bread still in one piece! Fortunately, during this thunderstorm, Leo just passed by with my favorite food of this country: Tamarind fruit! Apparently, he has some trees in his own garden with these fruits and when I told him I simply adored these things, he gave me a whole bag that can last for two months!

Yesterday, Leo finally worked out how to get us free access to Clube de Campestre, a relaxing club on top of a hill on the campus with BBQ places, pool tables, beach volleybal and a big swimming pool. We took advantage of this free access and the incredibly warm weather to put our bikinis on and take a jump in the cool water. We are all sure that we will come back to this place as soon as we have spare time!

I promised to explain something about the experiments of Tessa and Yvonne this week, but due to lack of space and pictures, I have to move this to next week. Also, English Tea Cup Club, the start of Universidade Federal de Viçosa and ofcourse the arrival of Robert will be on the menu of next week.